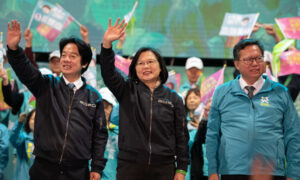 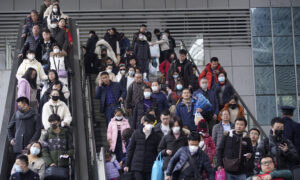 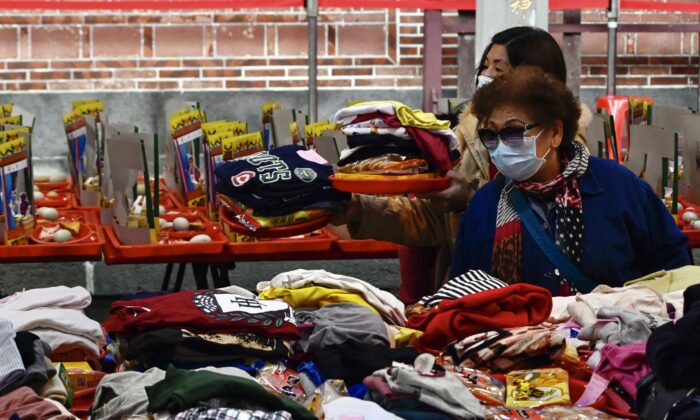 People wearing protective masks pray beside their clothes laid out on a table, at a Taoist Baoan temple in Taipei on Feb. 4, 2020. Taiwan has uncovered 10 cases of the new coronavirus so far, including two female Chinese nationals in their 70s who arrived in the country as part of a tour group. (Sam Yeh/AFP via Getty Images)
CCP Virus

TAIPEI—Taiwan dramatically escalated its war of words with Beijing on Feb. 4 over the island’s exclusion from the World Health Organization, saying “vile” China was preventing Taiwan from getting timely information about the coronavirus outbreak.

Taiwan is not a WHO member because of China’s objections. Beijing claims the island is a wayward Chinese province and is thus adequately represented in the organization by China.

Taiwan says it is not and has never been part of communist China.

China told the WHO on Monday that it had shared full information about the coronavirus with Taiwan, and that outbreak communication had been “smooth” between the two sides.

The WHO also says Taiwan has been getting the information it needs.

But speaking in Taipei, Taiwan Foreign Ministry spokeswoman Joanne Ou said Taiwan has received very limited information and has been unable to get it quickly.

“Although the virus is really serious, they are still using the ‘one China’ principle to impede Taiwan from taking part in the WHO’s technical meetings,” she said.

The Chinese regime views Taiwan as part of its territory, despite the island being a full-fledged democracy with its own military, currency, and constitution. And Beijing has never renounced the use of military force to unite the island.

Taiwan has reported 10 cases of the coronavirus.

“Disease has no national boundaries,” Ou added. “Putting political considerations over people’s health and safety, this, basically, is extremely vile.”

Taiwan has been getting virus information from friendly countries such as the United States and Japan, she said, adding that Taiwan’s epidemic prevention efforts seem to have worked well.

In another area of tension between Taiwan and the WHO, Taiwan Health Minister Chen Shih-Chung said they had lodged a protest with the WHO for listing on its website a total of 13 cases for the island.

“This is fake news,” Chen told reporters. “Our confirmed cases are only 10.”

The WHO did not immediately respond to a request for comment.

The island on Tuesday said it would deny entry to all foreign nationals who had been to China during the past 14 days starting Friday, extending an existing ban on visitors from China that does not include travelers and residents from Hong Kong and Macau.

China late on Monday allowed the first batch of an estimated 500 Taiwanese stranded in Wuhan, which has been locked down by the government as it tries to contain the spread of the virus, to return home.

Taiwan had complained that China had not responded to requests to fly out its citizens, even as Beijing gave such permission to other governments, including the United States and Britain.

Taiwan’s Mainland Affairs Council said in a statement on Tuesday that 247 people had arrived at Taipei’s main international airport late on Monday.

Taiwan President Tsai Ing-wen, writing on her Facebook page, expressed thanks for the efforts of both sides to get her countrymen back home.

“Although the two sides of the Taiwan Strait have different political stances, in the face of the virus human rights and humanitarianism should be put before political considerations,” she wrote.