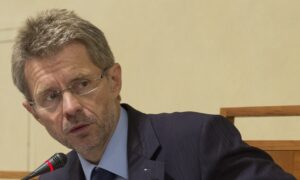 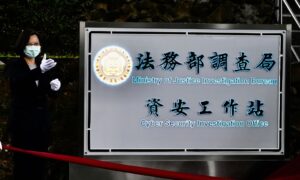 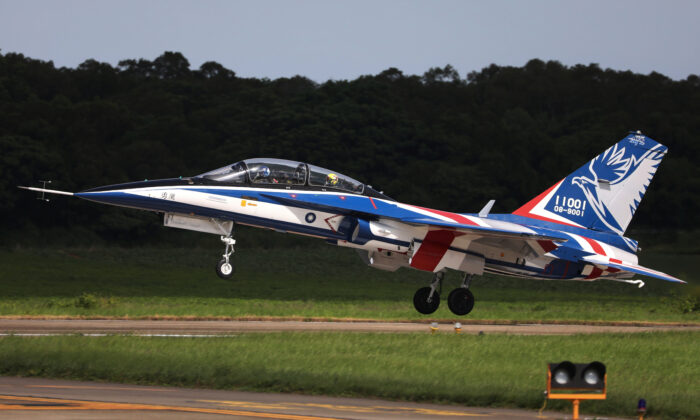 TAICHUNG, Taiwan—Taiwan President Tsai Ing-wen oversaw the first public test flight of a new locally designed and made advanced jet trainer on June 22, part of her government’s plan to boost defenses in the face of a growing challenge from China.

Taiwan’s armed forces are mostly equipped by the United States, but Tsai has made development of an advanced home-grown defense industry a priority, especially as the Chinese regime, which claims the island as its own, steps up military modernization efforts.

The new AT-5 Brave Eagle, made by state-owned Aerospace Industrial Development Corp with a budget of T$68.6 billion ($2.32 billion), is the first jet made domestically since the F-CK-1 Ching-kuo fighter, rolled out more than three decades ago.

Speaking at an air base in the central city of Taichung, Tsai said the new aircraft disproved naysayers who thought Taiwan lacked the technology and should focus on meeting its defense needs from abroad.

“The new trainer aircraft not only has created more than 2,000 job opportunities, but will also pass on experiences and cultivate a new generation of aerospace industry technical talent,” she said.

The single AT-5, flanked by a Ching-kuo fighter, made a 12-minute flight in front of Tsai. Its first official test flight was earlier this month, less than a year after the prototype was unveiled.

The trainer can be equipped with weapons. Taiwan’s air force plans on taking 66 units by 2026 to replace aging AT-3 and F-5 training aircraft.

The test flight came amid a stepped-up Chinese military presence near the democratic island. Taiwan says China’s air force has flown near it at least eight times in the last two weeks, the latest on Monday.

Taiwan unveiled its largest defense spending increase in more than a decade last year, and the government is also developing new, domestically-made submarines.