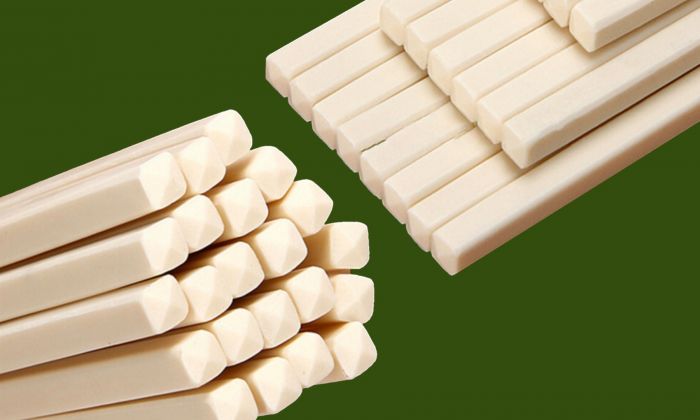 Taiwan’s Food and Drug Administration (TW-FDA) published a list of unqualified consumer products on April 16, which included 35,000 pairs of China-made chopsticks that were seized by Taiwan customs because they contained formaldehyde, a known carcinogen.

From the photo TW-FDA posted, one can see from the chopsticks’ packaging that the label lists the products as made of resin, but the TW-FDA said in a press conference that the utensils were in actuality made out of plastic.

The 35,000 pairs of chopsticks were packaged in sets of 10 into 3,500 products labeled under the brand “Jia Yan,” according to the TW-FDA.

They were manufactured by the Guangzhou Qiquan Chopsticks Factory, and imported with the intention of being sold by Chian Siang, a retailer based in Taichung City, Taiwan.

Customs officials seized the problematic chopsticks on March 7, and destroyed them after the TW-FDA found that they contained formaldehyde.

According to U.S. National Cancer Institute, formaldehyde is a colorless, flammable, strong-smelling chemical.

Since 2011, the U.S. National Toxicology Program has named formaldehyde as a known human carcinogen.

This is not the first time Taiwan authorities found China-made chopsticks to be unsafe. The TW-FDA announced on Jan. 22 that 288 sets of China-made ironwood chopsticks were found unqualified because they contained polyurethane coating. After they were seized by Taiwan customs, the chopsticks’ coating were found to have been made with colorants solvent yellow 21 and solvent orange 62, which are dyes used for industrial purposes. Many countries do not allow them to be used in the food business, including Taiwan and China.

The chopsticks were packaged for Daiso, a popular Japanese dollar shop. The product packaging included Japanese text, making them seem like a Japan-made product. They were in fact made by the Fuzhou Yujinyuan Arts & Crafts Company in China. They were imported into Taiwan by Sunworld Transportation Logistics based in Taipei City.

On the U.S.-based e-retailer Amazon, hundreds of similar chopsticks are on sale. Most of them are labeled “Japanese,” but in fact made in China.

One product sold by the brand Antner, for example, is labelled “handmade Japanese chopsticks.” But a user “SM in Arizona” commented: “I just received mine today (Jan. 31), and there are two stickers on the back of the box which both clearly state ‘Made in China.’”

There are also U.S.-based e-retailers that target Chinese consumers, with Chinese-language webpages and mostly selling Chinese-made products, such as Yamibuy and 86mall. They also sell China-made chopsticks with Japanese packaging, but at cheaper prices.