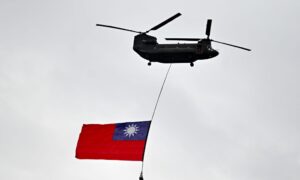 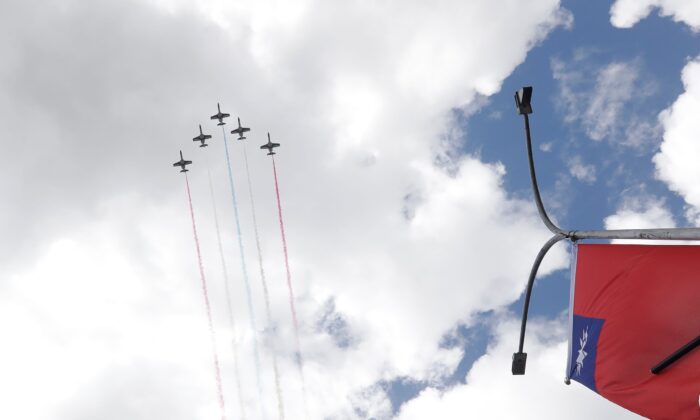 Part 1: The future may be defined by Taiwan, China, and the US

A professor of international relations at Peking University, Jia Qingguo, recently observed that the aggressive interactions between Taipei, Beijing, and Washington were like the formation of “a perfect storm.”

Then 10 days later, on Taiwan’s National Day, China’s Xi Jinping vowed “to fulfill reunification.” Many believe that seizing Taiwan would be a major achievement in solidifying his legacy, before beginning his presumed third term of leadership in 2022.

Taiwan President Tsai Ing-wen responded by telling the Taiwanese people, “We will not bow to Beijing pressure.” U.S. national security adviser Jake Sullivan told the BBC that the United States would “stand up and speak out” over Chinese aggression across the Taiwan Strait.

The Chinese Communist Party (CCP) claims that Taiwan belongs to China and should be reunited with the mainland, and has not renounced the use of force to bring Taiwan into the fold. Taiwan is prepared to defend itself. And the U.S. Navy is standing by, ready for action—although it is unclear if the United States would enter the fight. This three-way dynamic could easily determine the future of the globe.

Taiwan sees itself as a country. The Chinese regime sees it as a renegade province. The United States has no official opinion, but it is committed to providing the self-ruled island with military aid to prevent forced annexation by the CCP. And Beijing sees U.S. support of Taiwan as meddling in its internal affairs. Most experts agree that a declaration of independence by Taiwan, or a recognition of Taiwan independence by the United States, would trigger a war with China.

When Tsai, of the Democratic Progressive Party (DPP), won Taiwan’s 2020 presidential election in a landslide, the people of both Taiwan and Hong Kong cheered. The United States sent messages of congratulations. Then-President Donald Trump even phoned President Tsai, the first such call between the leaders of the two countries in decades.

The CCP complained and said, “China expresses strong indignation and condemnation over such moves,” according to state-run media Xinhua. Beijing called the congratulatory message “a severe violation of the one-China policy … and a serious interference in China’s internal affairs,” the report said.

China’s People’s Liberation Army (PLA) frequently violate Taiwan’s air and sea space, and carries out acts of intimidation that is meant to discourage movements toward independence. These tactics have become more aggressive since the election, with the CCP issuing an official statement, saying that Beijing would take Taiwan by any means possible, including force, under China’s Anti-Secession Law.

After the close of World War II, the Chinese Civil War that had started in 1927 resumed, pitting the nationalist Kuomintang (KMT), under Chiang Kai-shek, against the Chinese Communist Party, led by Mao Zedong. In 1949, the communists won, driving Chiang and about 2 million refugees and soldiers from his nationalist army to flee to the island of Formosa (Taiwan). They established a temporary capital for the Republic of China (ROC, Taiwan’s official name) in Taipei, vowing to re-establish themselves as the government of mainland China.

The ROC lies about 81 miles from the southeast coast of China, bordering on the East China Sea, Philippine Sea, South China Sea, and Taiwan Strait. Over 95 percent of the country’s 23.6 million citizens are ethnic Chinese. The rest are members of 16 recognized indigenous groups, composed of Malayo-Polynesian peoples.

In 1971, the United Nations recognized the People’s Republic of China (PRC). Taiwan was offered dual occupancy of the seat but refused, withdrawing from the U.N. instead. From that time, the status of the island nation became ambiguous. It was no longer a country and no longer officially recognized by the majority of U.N. members. Theoretically, the ROC could have stayed, along with the PRC, but with a single seat, which may not have made Taiwan’s situation better today and possibly could have made it worse.

The Montevideo Convention sets out four criteria that an entity must meet in order to be considered a country: “Countries must have a permanent population, a defined territory, a functioning government, and the capacity to enter relations with other states.” Although not a requirement, but evidence of statehood, Taiwan engages in international treaties and organizations, and is recognized by 15 countries, 14 of which are U.N. members. Additionally, Taiwan has other earmarks of nationhood such as a sovereign currency and a military with 300,000 active troops.

The PRC’s claims to Taiwan are extremely weak. Taiwan was never part of the Republic of China officially. The 1911 map of the ROC is often used by Beijing to claim sovereignty over East Turkestan, Tibet, Mongolia, Hong Kong, and Macau. But Taiwan is absent from that map, as it was a Japanese colony. At the end of World War II, the United States oversaw the dismantling of the Japanese Empire, forcing Japan to relinquish control of Taiwan, but it was never specified to whom. The United States allowed its KMT allies to administer Taiwan, but no official permission was ever given. Technically, one could make the case that the United States has a greater claim to Taiwan than does the PRC.

During the 1950s and 1960s, the United States provided economic assistance to promote Taiwan’s development. Today, Taiwan no longer needs this assistance as the country has an average income of $25,000 per year, one of the highest in Asia.

Additionally, the country is a high-functioning democracy. Opposition parties were allowed to form in 1986. Martial law was repealed by 1988. In 1991, Taiwan officially ended its state of war with the PRC, but rejected offers to unify with the mainland.

In 1996, the first direct presidential elections were held. Kuomintang rule finally ended in 2000 when Chen Shui-bian, of the pro-independence Democratic Progressive Party, was elected. In 2016, the DPP rule was continued when Tsai was elected to her first term.

Tsai’s DPP has as its ultimate goal—the independence of Taiwan. DPP member and former Vice Premier Chiou I-jen said that this goal cannot be decided by Taiwan alone because “we have to consider the current international situation, as well as China’s possible reaction” and possible pushback from the United States.