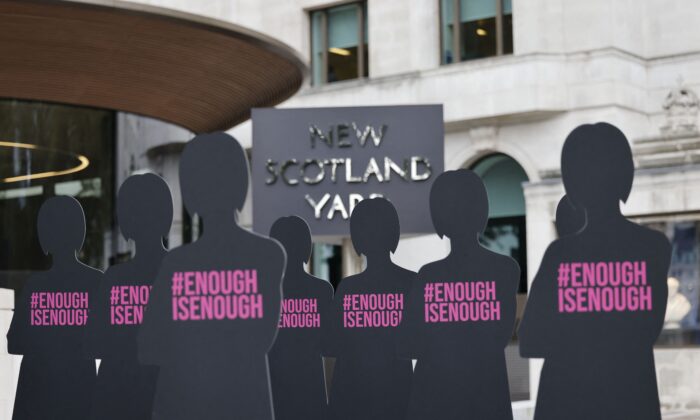 Cut-out silhouettes representing women are set up outside the Metropolitan Police headquarters New Scotland Yard in an action by Refuge, the domestic abuse charity, to highlight the issue of women who have been killed by male police officers or former police officers, in London on Oct. 7, 2021. (Tolga Akmen/AFP via Getty Images)
UK

One of the biggest investigations ever into the way police forces in England and Wales investigate domestic abuse allegations against their own officers has found there are “systemic deficiencies” and has recommended a series of improvements.

But a joint report by the College of Policing, Her Majesty’s Inspectorate of Constabulary and Fire and Rescue Service and the Independent Office for Police Conduct (IOPC) found no evidence investigations involving serving officers were conducted any differently than other domestic abuse allegations.

The report followed a so-called “super-complaint” submitted by the Centre for Women’s Justice (CWJ).

The investigation examined several CWJ case studies, as well as 56 domestic abuse cases where allegations were made against a police officer.

The report found 14 out of 149 domestic abuse allegations since 2018, involving police officers from 15 forces, resulted in a charge, which is the equivalent of 9 percent and similar to the usual charge rate in domestic abuse cases.

The investigation found some forces needed to do more to reassure victims when the suspect worked for the police and said they needed to go “the extra mile to show that they understand the importance of protecting and demonstrating the integrity of the police response.”

Several recommendations were made in the report, including that police forces should make sure domestic abuse allegations are investigated by an officer who has had no dealings with the suspect before, and if necessary bring in a neighbouring force to conduct the investigation.

It also recommended chief constables should carry out an audit of all live allegations of domestic abuse against officers and staff which finished within the last year.

The Head of Crime and Criminal Justice at the College of Policing, Dave Tucker, said in a statement: “Our recommendations will significantly improve the police response to these allegations, so that victims of domestic abuse know they will be properly protected, receive a high standard of care and a good investigation—regardless of who the suspect is.”

The IOPC’s Director for Strategy and Impact, Kathie Cashell, said, “We hope that victims of domestic abuse will feel reassured that, as a result of this super-complaint investigation, a spotlight has been shone on the police response to police perpetrated domestic abuse, which will now be subject to greater scrutiny.”

The Centre for Women’s Justice wrote on Twitter, “Shortcomings in the super-complaint process of investigation mean that some of the most egregious accounts of corruption have not been investigated—we maintain our call for a statutory public inquiry into police perpetrated abuse.”

Earlier this month the government unveiled new legislation that could punish non-fatal strangulation with up to five years in prison.