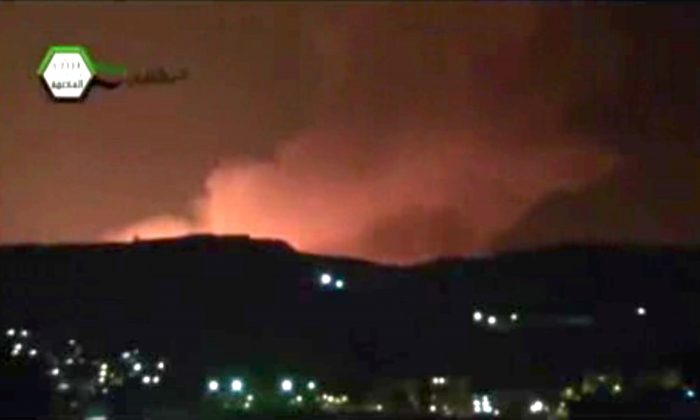 Smoke and fire fill the the skyline over Damascus, Syria, early Sunday, May 5, 2013 after an Israeli airstrike in an image taken from Ugarit News footage. Israeli warplanes targeted a shipment of highly accurate missiles believed to be on their way to Lebanon's Hezbollah terrorist group. (AP Photo/Ugarit News via AP video)
Middle East

Al-Mekdad told CNN that Syria would retaliate, though he did not specify exactly how or when.

Officials and activists have said Israel targeted highly accurate, Iranian-made guided missiles that Syria may have been sending to Lebanese terrorist group Hezbollah.

An intelligence official in the Middle East spoke with the Associated Press on condition of anonymity, confirming that Israel targeted Fateh-110 missiles in Damascus, Syria, Sunday morning, the second attack in three days.

An Israeli military spokesman declined to comment when questioned by CNN, but CNN points out that Israel has said before it would stop any transfer of weapons to Hezbollah.

A senior Israeli defense official, not authorized to speak to the media, told CNN‘s Sara Sidner on condition of anonymity: “We are watching everything when it comes to the movement of these types of weapons. We have the means to do that.”