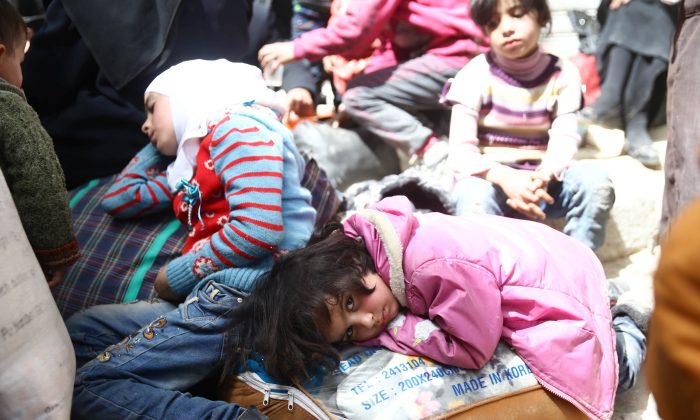 A girl looks at the camera during evacuations from the besieged town of Douma, Eastern Ghouta, in Damascus, Syria March 22, 2018. (Reuters/Bassam Khabieh)
Middle East

BEIRUT/DAMASCUS—Syrian rebels withdrew in busloads from a town in eastern Ghouta on Thursday and handed it over to the army, the first such surrender since one of the fiercest campaigns of the seven-year war began more than a month ago.

The Ahrar al-Sham group’s decision to accept the army’s terms and abandon the town of Harasta puts the government on course for its biggest victory over rebels since the battle of Aleppo in 2016.

And in another part of the same region, the controlling rebel group, Failaq al-Rahman, said a ceasefire had been agreed, to start within hours at midnight local time, to allow a “final negotiating session” to take place.

An army officer interviewed on state television said rebels who had not yet negotiated similar deals to evacuate from other towns in eastern Ghouta must quit or die.

“Death is coming for you if you do not surrender,” he said.

The army’s assault on eastern Ghouta, the last major rebel bastion near the capital, has been one of the most intense in Syria’s seven-year-old war, killing more than 1,500 people in a relentless bombardment with warplanes, rockets and shells.

Before boarding the buses out of Harasta, a small group were shown on television in the fading light kneeling in a line for Islam’s sunset prayer — perhaps the last they would perform in their hometown. Children ran among the adults waiting to board.

Between 18,000 and 20,000 people were expected to stay in Harasta under government rule, a military source said.

The eastern Ghouta campaign has seen Syria and its Russian allies use the tactics that proved successful in other parts of the country since Moscow joined the war in 2015: lay siege to an area, bombard it, launch a ground assault and finally offer safe passage out to rebels who agree to leave with their families.

State television reported that more than 6,000 people had fled Douma since Wednesday, crossing over into government-held territory.

Government airstrikes pummelled parts of the region on Thursday morning, striking Arbin and Zamalka and killing 19 people, according to the Syrian Observatory for Human Rights war monitoring group.

Failaq al-Rahman’s Istanbul-based spokesman Wael Alwan said it had contacted the United Nations to mediate a ceasefire with Russian forces “in order to negotiate with the Russian side about finding a solution to guarantee the safety of civilians and to guarantee that their suffering stops”.

On Sunday, Assad drove himself to a newly captured battlefront in eastern Ghouta, a demonstration of his seemingly unassailable position in a war that has been going his way since Russia sent its air force to help him in 2015.

The deal to surrender Harasta began on Thursday with a prisoner swap. In an interview with state television, a Syrian soldier freed by rebels wept and thanked God and the army for his release.

The Russian Defence Ministry website showed what it said was live footage from the al-Wafideen crossing point from Douma into government areas. Over a period of several minutes, it showed dozens of people in small groups coming around a corner and trekking along the dirt road past armed soldiers.

Some bore bundles of possessions, others carried small children or pushed prams.

Douma is the most populous area in eastern Ghouta, and for more than a week it has been entirely surrounded by the government. Jaish al-Islam has said it is determined to fight on. However, the Observatory said people leaving the area were doing so under an agreement between the group and Russia.

The Syrian government and Russia accuse rebels in eastern Ghouta of preventing civilians from leaving to use them as human shields, which the rebels deny. Moscow and Damascus say their campaign is needed to end rebel shelling of the capital and other nearby areas. On Tuesday, a rocket struck a marketplace in a government-held town, killing dozens.

However, the ferocity of the Syrian army’s offensive in eastern Ghouta has prompted Western condemnation and urgent pleas from United Nations humanitarian agencies for a ceasefire.

The Harasta rebels will be taken to Idlib province in the northwest, which has become the main sanctuary for insurgents who agree to quit territory under deals with the government.

The northwestern province is the biggest remaining area under rebel control in Syria and its population has been doubled by refugees fleeing other areas.

But it too is a target for forces loyal to Assad, who vows he will reassert control over the entire country. The Observatory said that, over the previous 48 hours, air strikes on Idlib had killed at least 63 people.