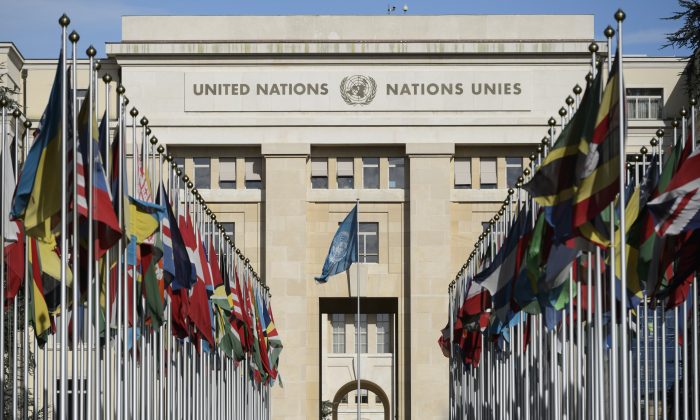 Flags hang in front of the European headquarters of the United Nations during a round of negotiations between the Syrian government and the opposition in Geneva, Switzerland, on Feb. 2, 2016. (Laurent Gillieron/Keystone via AP)
International

GENEVA—The Syrian government allowed aid into a rebel-held area near Damascus on Tuesday in what appeared to be a goodwill gesture after U.N.-mediated indirect peace talks got off to a rocky start in Geneva.

The Syrian Arab Red Crescent delivered 14 trucks of aid provided by the International Committee of the Red Cross to the al-Tal suburb, said Damascus-based ICRC spokesman Pawel Krzysiek. He told The Associated Press the delivery included food and hygiene kits for some 3,500 families as well as 25 metric tons of bulk food.

The Syrian opposition had demanded that aid be allowed into 18 besieged areas throughout the country and that Syrian and Russian forces halt the bombardment of rebel-held areas ahead of the talks, which officially began Monday.

But as U.N. envoy Staffan de Mistura has shuttled between the government and opposition delegations in Geneva, Syrian troops backed by Russian airstrikes have captured three villages north of the city of Aleppo. The military offensive and the continuing blockade of rebel areas has infuriated the opposition and thrown the future of the talks into question.

The military offensive and the continuing blockade of rebel areas has infuriated the opposition and thrown the future of the talks into question.

Opposition official Ahmad Ramadan dismissed the aid shipment to al-Tal as an empty gesture, saying “the only way” to save the negotiations is for “the United Nations and the United States to force an end to bombardment and the targeting of civilians.”

The delivery to al-Tal came a day after the Syrian government approved a U.N. request for new aid deliveries to the besieged towns of Madaya, Foua and Kfarya, where hundreds of civilians are facing severe malnutrition and some have starved to death. It was not immediately clear why food was sent to al-Tal and not the other areas.

The Britain-based Syrian Observatory for Human Rights said al-Tal has been under siege by Syrian President Bashar Assad’s forces for months.

De Mistura kicked off what he called a second day of peace talks by hosting a government delegation for the second time since Friday. He said he would meet with the main opposition group later in the day.

But opposition figures said they had no scheduled meeting with de Mistura on Tuesday, and condemned what one member called the “crazy escalation” by Syrian and Russian forces around Aleppo.

The talks are aimed at ending a war that has killed 250,000 people, displaced millions and left much of the country in ruins.

The talks are aimed at ending a war that has killed 250,000 people, displaced millions and left much of the country in ruins. The last round of talks broke down in 2014, and expectations are low.

The government has criticized the presence in the opposition delegation of individuals from two hard-line Islamic groups—the Army of Islam and Ahrar al-Sham—that it considers terrorist organizations. The government said over the weekend it would “never accept” the inclusion of the two groups in the talks.

After meeting with de Mistura on Tuesday, Syria’s U.N. ambassador Bashar Ja’afari—the head of the government delegation—called the opposition “amateurs” and said his delegation was still waiting for a list of opposition participants.

The opposition hit back, saying the government wants to derail the peace process through its military actions.

“The regime’s and Russia’s actions gravely threaten the political process at early stages. We urge the international community to take immediate, serious and clear steps to ensure the credibility of this process,” said Farah Atassi, another member of the opposition delegation.

U.S. Secretary of State John Kerry, speaking from Rome at an international conference focused on the battle against the Islamic State (ISIS), also called for a halt to the bombing.

We are all extraordinarily sympathetic to the limits of propriety and common sense in the opposition sitting at the table while someone continues to bomb them.
— John Kerry, U.S. secretary of state

“We are all extraordinarily sympathetic to the limits of propriety and common sense in the opposition sitting at the table while someone continues to bomb them,” Kerry said. He added that the U.N. agreement underpinning the talks states that “when the political dialogue begins, there will be a cease-fire. The expectation is that it shouldn’t take long.”

Moscow has been a key ally of the Syrian government throughout the five-year uprising and began launching airstrikes four months ago.

The strikes have allowed Syrian troops to advance on a number of fronts. The Observatory, an opposition group that monitors both sides of the conflict through local activists, said troops have captured three villages near Aleppo since Monday, opening a key supply route into the city.

Russia realizes the importance of a cease-fire. But that doesn’t relate to terrorists.
— Gennady Gatilov, Russia's deputy foreign minister

“Russia realizes the importance of a cease-fire. But that doesn’t relate to terrorists,” he said.

Russia has played a pivotal role in organizing the current talks, along with the United States, and does not want to see them derailed.

Russian Foreign Minister Sergey Lavrov told reporters in Abu Dhabi that all opposition parties in Syria except for ISIS and the al-Qaida-affiliated Nusra Front should take part in the negotiations.

He said the inclusion of members of the Army of Islam and Ahrar al-Sham in the opposition delegation reflects “realistic stances.” But he said it did not amount to “recognition of them as legitimate partners” for peace, adding that they “are considered terrorist groups.”

The chief negotiator of the opposition’s High Negotiations Committee meanwhile said he was pessimistic about the talks.

Mohammed Alloush, a member of the Army of Islam, told reporters in Geneva that “the situation on the ground has not changed and as long as the situation stays like that there is no optimism from our side and no good intention to reach a solution by the regime.”