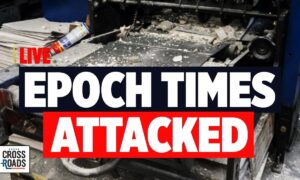 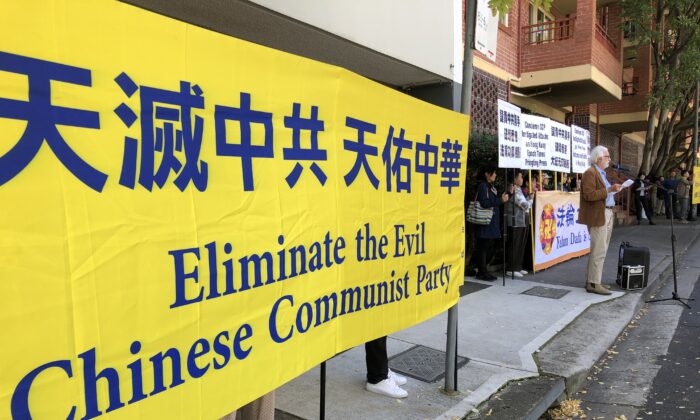 Australians have rallied on Thursday to condemn the Chinese Communist Party’s (CCP) escalating attacks on people of faith and on press freedom after the Hong Kong office of The Epoch Times printing facility was attacked on Sunday.

Gathering in front of the Chinese consulate in Sydney, The Epoch Times Australia, Falun Gong practitioners, and human rights activists spoke out against the CCP’s violent intimidation tactics to suppress freedom of speech in the island province and called on the public to stand together against the communist regime.

Hong Kong citizens who follow the spiritual practice of Falun Gong have recently experienced an escalation of ongoing violence by hired thugs.

Since 2012, a CCP-affiliated organisation called the Hong Kong Youth Care Association has harassed practitioners on Falun Gong information sites. While the group was officially disbanded on Dec. 31 2020, the attacks have continued.

“Just as the CCP claimed to have disbanded its labour camps in 2013, while just changing camp names and continuing to incarcerate Falun Gong practitioners, the attacks in Hong Kong have continued under a different guise,” representative of the Australian Falun Dafa Association Emmy Pfister said in her speech.

In the past two weeks, seven Hong Kong Falun Gong information booths have been vandalised, with signs destroyed, and practitioners verbally and physically threatened.

“Since the National Security Act was passed in July 2020, the CCP is expanding its brutal tactics of control,” Pfister said. “Hong Kongers have come to know and respect the efforts of Falun Dafa practitioners to safeguard traditional values, freedom of belief, and freedom of speech in Hong Kong.”

“To the staff at the Chinese consulate, we urge that you do not act against your conscience,” Pfister said.

Sophie Xiao, a Hong Kong citizen, currently residing in Sydney, told The Epoch Times that she believed the suppression of freedoms for the people of Hong Kong was “just one of the CCP’s mechanisms” and that it would continue until the freedoms for religion, speech, and press completely dissipate.

“I hope the free world, no matter whether it’s governments or the people, voice their support for the only few remaining people [in Hong Kong] who are standing and fighting for their freedom,” Xiao said. “What we can do here is to continue to voice for them.”

“What’s happening in Hong Kong is what happens everywhere where communism takes over—all free speech must be crushed,” Vinnicombe said. “The Marxists don’t believe in free speech. They never have. They say free speech is just a bourgeois concept.”

Sydney-based Epoch Times reporter Mimi Nguyen Ly urged Australians, Hong Kong citizens, and people around the world to stand with The Epoch Times on the side of freedom, and truth and tradition.

“The CCP has used every trick in the book to suppress The Epoch Times in Hong Kong to try to prevent the public from having access to independent news,” she said. “We continue to stand firm in the face of the CCP and any other force that seeks to stifle press freedom.”

“We all need to let the Chinese Communist Party know that it’s not going to take away freedom from the Hong Kong people and from the world.”