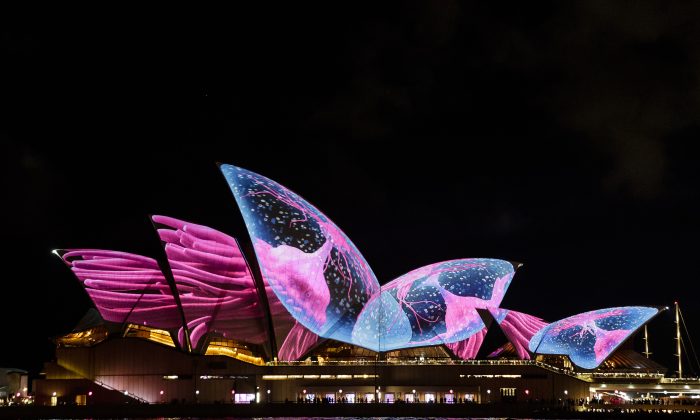 The Sydney Opera House sails are lit for the start of the Vivid Festival in Sydney, Australia on May 26, 2017. (Brook Mitchell/Getty Images)
International

Sydney Lights up for Its Annual Vivid Festival

Sydney has been lit up for its annual Vivid light show which runs from May 26 until June 17.

The city is now bathed in vibrant color and a dizzying array of special effects in the world’s largest festival of lights, music, and ideas.

The show features seven light precincts and more than 90 large scale light installations and projections, plus over 400 music events. Overall, there are works by more than 180 local and international artists.

The festival has been running for nine years, and this year is the largest to date. Organizers hope to better last year’s attendance record of 2.3 million visitors, and also bring in more than AU $110 million (US $82 million).

Highlights include the Sails of the Sydney Opera House featuring “Audio Creatures”—a presentation of sea creatures and plant life imagined to be lurking deep in the harbor, curated and designed by director Ash Bolland and set to music by Brazilian electronic producer Amon Tobin.

Also featured is the “Electric Forest,” a show at the Royal Botanic Garden, which turns tree canopies and the trunks of 100-year-old Ficus plants into living canvases.

“This year’s lights will help spread a valuable message around sustainability and the importance of protecting fragile ecosystems, delivered in the most captivating, natural botanical environment of all,” said the garden’s Executive Director Kim Ellis, in a media release.