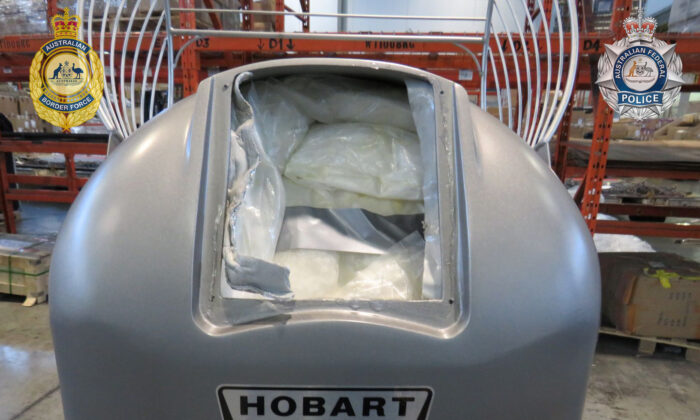 Three men have now been charged after 100kg of meth was found inside a commercial dough mixer in Sydney, Australia on April 3, 2022. (Australian Defence Force)
Australia

A Sydney freight worker will face court accused of involvement in the attempted importation of 100 kilograms of methamphetamine hidden inside a dough mixer.

Australian Federal Police will allege the 39-year-old from Beecroft used his role at a freight forwarding company to facilitate importing the drugs from Canada.

He is the third Sydney man charged after a transnational drug trafficking investigation, which began when 100 kilograms of meth was found inside a commercial dough mixer by Canadian border police.

The shipment was seized and the drugs replaced with a harmless substance before being sent to NSW and delivered to a property in Wentworthville.

A Punchbowl man, 37, who allegedly organised the importation, has been charged and will face Sydney Central Local Court on April 13.

The Beecroft man will face Hornsby Local Court on April 13.

AFP officers found a second consignment of 40 plastic bags, which contained about one tonne of a precursor used to manufacture methamphetamine and MDMA.

A Liverpool man, 28, has been charged with providing material assistance to a criminal group and will face Campbelltown Local Court on April 20.