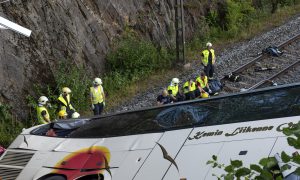 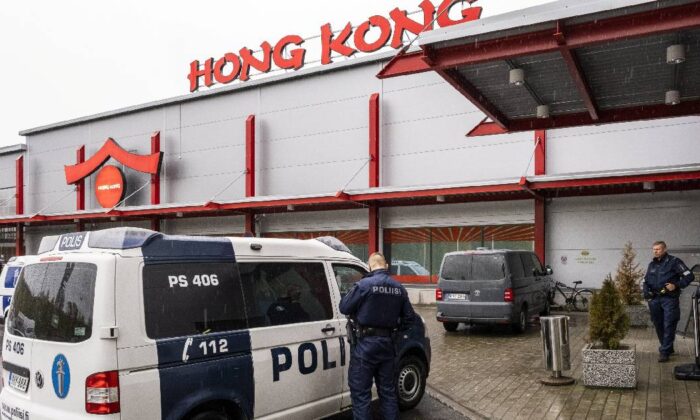 Policemen in front of the Herman shopping center where the Savo Vocational College is located in Kuopio, Finland, on Oct. 1, 2019. (Hannu Rainamo/Lehtikuva/via Reuters)
Europe

HELSINKI—A male student armed with a sword killed a woman and wounded nine others in an attack at a college in eastern Finland on Oct. 1, which the prime minister described as “shocking.”

The suspected attacker, who is in his mid-20s, used “a saber-type of bladed weapon,” chief inspector Mikko Lyytinen said in the city of Kuopio, where the attack took place. The motive for the attack was not clear.

A police spokesman put the toll at one dead and 10 injured, including the suspect. He was seriously wounded when police opened fire on him at the college, located in a shopping center, Lyytinen said.

The suspect was caught eight minutes after the alarm was raised and the wounded were taken to Kuopio University Hospital. The victims ranged in age between 15 and 50, and more than half were female, the hospital’s chief physician, Antti Hedman, told Finland’s public broadcaster YLE. Two were seriously hurt.

“Eight of the patients were less seriously injured, mostly with wounds from defending themselves,” Hedman said.

Police didn’t identify the suspect, but said he was a male Finnish citizen born in 1994. In addition to the sword, he carried a gun but it wasn’t clear whether he used it, police said.

At the time of the attack, there was also a small fire on the shopping center’s second floor that had been deliberately lit; police didn’t say whether the attacker had started it.

Police said they found unused petrol bombs during a raid on his apartment.

“The act of violence at Savo Vocational College in Kuopio is shocking and we utterly condemn it,” Rinne said on Twitter. “I have had discussions with top police officers and the government is following the situation closely.”

Finnish newspaper Iltalehti quoted a witness as saying that a student had come to class with a large bag, taken out a sword, and attacked a teacher.

The Nordic country, which is considered relatively safe, with low crime levels, has a grim history of deadly school attacks in the past 12 years.

In neighboring Sweden, a masked swordsman killed a teaching assistant and a pupil in an attack in 2015 at a school in Trollhattan. All the victims in the Swedish attack had immigrant backgrounds and the police said the 21-year-old killer, who was shot dead, was driven by racist motives.