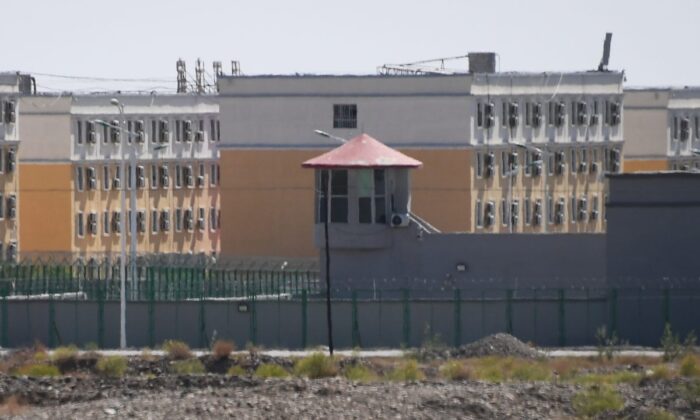 A facility believed to be a reeducation camp where mostly Muslim ethnic minorities are detained, in Artux, north of Kashgar in China's western Xinjiang region, on June 2, 2019. (Greg Baker/AFP/Getty Images)
China Human Rights

ZURICH—Switzerland called a meeting with China’s ambassador to express its concern about the human rights situation in the western region of Xinjiang, the foreign ministry in Bern said on Thursday, correcting its earlier comment that it had “summoned” the envoy.

“Switzerland is convinced that the best way to safeguard its interests and the respect of fundamental rights is to conduct a critical and constructive dialogue with Beijing,” the ministry said, confirming a report by the SDA news agency.

The ministry cited a report last week by the United Nations human rights commissioner that the Chinese communist regime’s “arbitrary and discriminatory detention” of Uyghurs and other Muslims in Xinjiang may constitute crimes against humanity.

The Chinese embassy took issue with the original Swiss account that it had summoned the ambassador.

“The Chinese Ambassador to Switzerland, H.E. Wang Shihting, met with FDFA officials on the morning of September 8, but it was just a regular working meeting, not a ‘convocation’,” it said, accusing media of deliberately distorting the situation.

China’s foreign ministry has denied the allegations about the treatment of Muslims in Xinjiang.

Switzerland has walked a diplomatic tightrope with Beijing, playing down prospects for embracing Western sanctions against China over its human rights record as Bern pursues a “special path” with a major trade partner.

In unveiling a new strategy on China last year, Bern announced few concrete policy changes and stressed the importance of bilateral ties. But it spoke more openly about its disapproval of the Chinese regime’s human rights record than it has tended to do in the past.