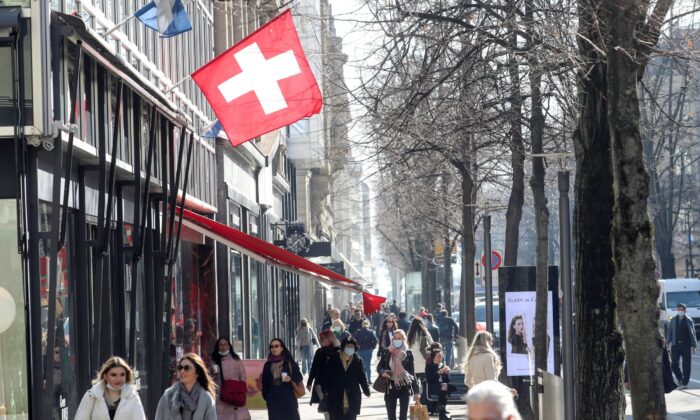 Shoppers walk along the street after the Swiss government relaxed some of its COVID-19 restrictions at the Bahnhofstrasse shopping street in Zurich, Switzerland, on March 1, 2021. (Arnd Wiegmann/Reuters)
Economy

It now expects the country’s economy to expand 2.0 percent this year, down from its June forecast for 2.6 percent growth.

In 2023 the economy is expected to expand by 1.1 percent, the State Secretariat for Economic Affairs (SECO) said, down from the previous expectation of a 1.9 percent increase.

The figures are adjusted to remove the effect of major sporting events.

“After a positive first half of the year 2022, the Swiss economy now faces a deteriorating outlook,” SECO said. “A tense energy situation and sharp price increases are weighing on economic prospects, especially in Europe.”

Switzerland, which is less dependent on Russian gas and has seen significantly lower inflation than the neighboring eurozone, traditionally has one of Europe’s more robust economies.

SECO said a favorable unemployment situation in Switzerland, with an expected jobless rate of 2.2 percent this year and 2.3 percent next, would continue to support domestic demand.

But foreign demand was expected to weaken, with less demand for Swiss products expected from the eurozone, the United States, and China than previously forecast.

The overall outlook for the Swiss economy largely depended on the global economy and how the energy supply situation developed, SECO said, saying the sharp drop in Russian gas flows had raised the risk of shortages in Europe.

Although its forecasts were based on the assumption there would be no shortages, the Swiss economy would be “severely affected” if there was a reduction in gas or electricity, it said.