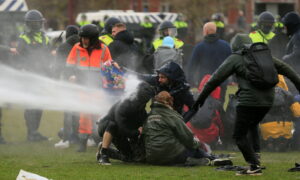 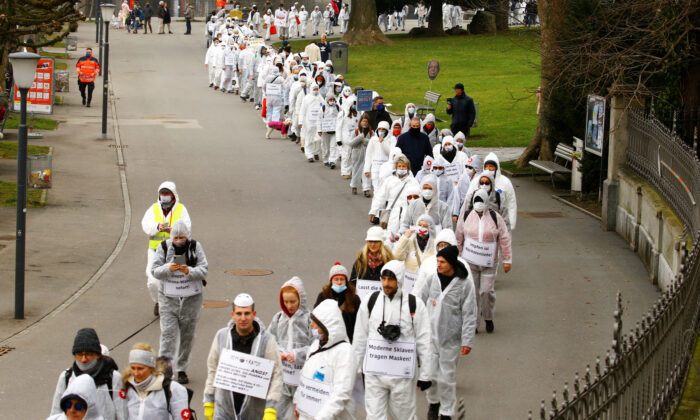 ZUG, Switzerland—Some 500 protesters marched through the Swiss tax haven of Zug on Saturday, wearing white protective suits and chanting dystopian slogans to voice displeasure with rules aimed at limiting the spread of the COVID-19 pandemic.

The demonstration was reminiscent of a rally a week ago in Vienna, where thousands opposed to that country’s even-stricter lockdown faced off against police.

Though Switzerland’s restrictions have been less severe than those in Germany, Austria, or Italy—restaurants and non-essential shops are closed but ski areas are open—there is still a steady buzz of opposition.

In Zug, police watched but did not intervene as a group of protesters filed from the train station to the centre of the lakeside city known for shell companies with letter-box addresses and attractive tax rates.

Marchers wore placards that read “Wearing a mask is modern slavery.” A loudspeaker droned, “Closeness is dangerous” and “Denounce those you love.”

“I want to make a statement, that the citizens are the ones who are in control, and the state should be there to serve its citizens,” one man said, without giving his name.

A woman said she was there for the next generation.

“I’m a grandmother,” she said. “I don’t want my grandchildren to grow up in a world where so much is forbidden.”

COVID-19 cases in Switzerland have dropped since hitting their peak late last year, though there were more than 1,500 new infections on Friday. Since the start of the pandemic, more than 530,000 Swiss have been infected and almost 9,000 have died.