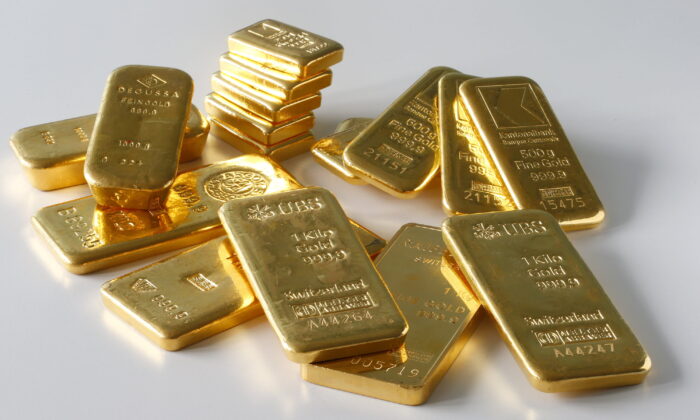 Gold bars from the vault of a bank, in Zurich, Switzerland, on Nov. 20, 2014. (Arnd Wiegmann/Reuters)
Markets

Swiss Gold Exports to the United States Rocketed in March

LONDON—Swiss shipments of gold to the United States surged in March to their highest since May 2020, Swiss customs data showed, as investors spooked by Russia’s invasion of Ukraine and the threat of a global economic slowdown stocked up on bullion.

Switzerland’s exports to Britain, which like the United States is a centre for gold investment and trading, also rose, while shipments of gold to China and India, the biggest consumer markets, fell sharply.

Switzerland is the world’s biggest refining and transit centre for gold, an asset typically seen as a safe place to store wealth in times of economic and political turmoil.

Exchange traded funds (ETFs) storing gold for investors added 185 tonnes worth around $15 billion to their stockpile in March, the most since July 2020, according to the World Gold Council.

Swiss exports to mainland China and Hong Kong fell in March to their lowest in a year and shipments to India were the smallest since May 2021. Exports to Britain were the highest since June 2021.

Gold was trading around $1,900 an ounce on Tuesday.

Following are numbers and comparisons.

To China To Hong Kong To India To Britain To the U.S.