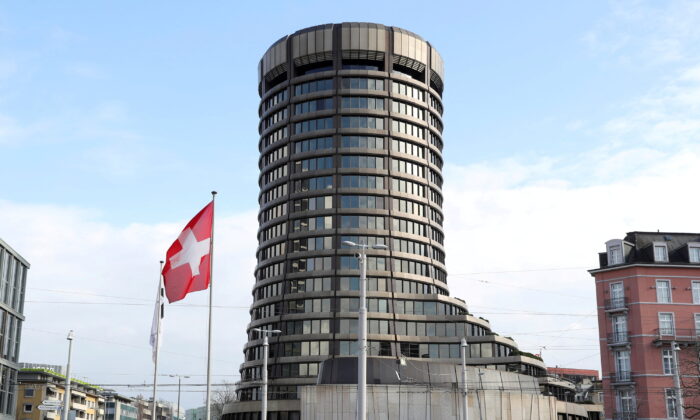 The tower of the headquarters of the Bank for International Settlements (BIS) is seen in Basel, Switzerland, on March 18, 2021. (Arnd Wiegmann/Reuters)
International

The Bank for International Settlements (BIS), the Swiss-based global financial umbrella body dubbed the “bank for central banks,” has said it won’t be an avenue for any circumvention of Western sanctions placed on Russia for invading Ukraine.

The BIS, which is owned by the world’s central banks and is headquartered in Basel, Switzerland, can conduct currency and reserves transactions for its members. But a spokesperson has made clear that the BIS will not carry out transactions that will allow Russia’s central bank to get around sanctions.

“The BIS will not be an avenue for sanctions to be circumvented,” spokeswoman Jill Forde said during a conference call with journalists that came in context of the BIS’ first major report of the year. “The BIS will follow sanctions as applicable.”

Forde’s remarks come in context of tough measures Western allies have imposed on Russia, including ejecting some Russian banks from the SWIFT interbank payment messaging system and restricting the ability of Russia’s central bank to access its $640 billion or so in foreign reserves.

Countries including the United States, Canada, France, Germany, and the United Kingdom have pledged to prevent the Bank of Russia, the country’s central bank, from deploying its vast reserves to blunt the blow of sanctions on Russia’s economy and currency.

In a joint statement, the Western powers said they would impose “restrictive measures that will prevent the Russian Central Bank from deploying its international reserves in ways that undermine the impact of our sanctions.”

While it’s unclear what proportion of the $640 billion in Russian reserves will be affected by the move, European officials have said that it would be at least half.

Russia spent years building up the reserves stockpile so it could stabilize its financial system in the face of market shocks.

Moves by Western allies to block Russia’s access to the war chest come in response to the Kremlin’s invasion of Ukraine.

President Vladimir Putin has characterized the offensive as a “special military operation” to protect Russians in the Donbass conflict zone and demilitarize Ukraine.

Western allies have described it as a violation of international law and a groundless act of aggression.

The raft of sanctions imposed in the wake of Russia’s military actions pushed the ruble to a record low on Monday, prompting the Russian central bank to more than double its key interest rate from 9.5 percent to 20 percent to defend the currency.

Moscow is also looking to order Russian exporters to sell 80 percent of their hard-currency revenues to boost market demand for the ruble and keep it from crashing.

In Russia, people worried that sanctions would deal a crippling blow to the economy have been flocking to banks and ATMs for days, with reports of long lines and machines running out of cash.