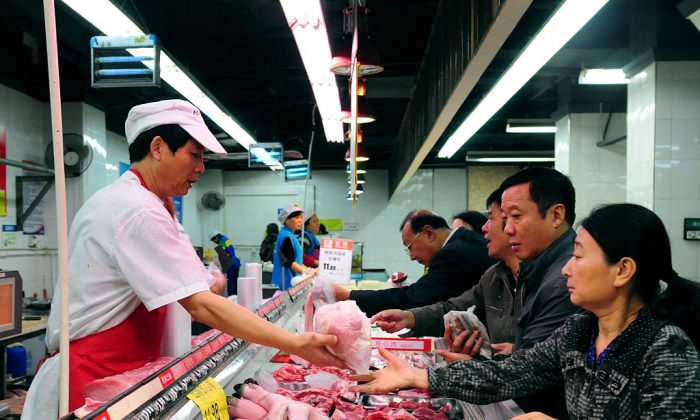 Pig farmers in Guangxi and Guangdong provinces in southern China have witnessed firsthand the decimation caused by the spread of African swine fever. But local authorities are denying that the pig deaths are the result of the epidemic.

Meanwhile, some pig dealers are processing the dead animals and profiting from selling the pork to unknowing customers, according to local accounts.

The first African swine fever (ASF) case in China was detected in the northeastern province of Liaoning on Aug. 3, 2018. By April 19, just over 8 months later, it had spread to all 31 provinces, regions, and municipalities of China.

ASF is a highly contagious and deadly disease affecting pigs and wild boars; there’s no cure or vaccine. However, the disease has no known harmful effect on humans, even if infected pork products are consumed.

Some nearby countries such as Mongolia, Cambodia, and Vietnam have since reported ASF outbreaks—which had not seen the disease prior to the epidemic in China.

A local resident in Bobai County, Guangxi posted a video online on March 25, in which dead pigs can be seen piled up on the sides of the streets. Shot from the vantage point of a person driving a vehicle, the person says in the video that he could hardly drive through the piles of carcasses.

Bobai County is a top pig-breeding area of Guangxi, with more than 5 million pigs raised in local farms every year, according to government data.

In response to the video, local authorities published an announcement on the county government website the following day, saying that veterinarians have determined that the pigs died from swine lung disease and erysipelas, an infectious skin disease often characterized by diamond-shaped lesions. The announcement also claimed that on March 19, under the direction of a local agricultural and rural supervision team, biological samples were taken from a Bobai County slaughterhouse and some pig farms. All test results came out negative for ASF.

But locals say otherwise. A netizen, whose moniker is “Three Years,” told the Chinese-language Epoch Times on April 29 that Bobai is his hometown. His parents in Bobai told him that abandoned dead pigs have piled up all over the county. In some pig farms, the entire herd has been wiped out. They believe the mass deaths can be caused only by a highly contagious and deadly disease like ASF.

Central authorities confirmed the first outbreak of ASF in Guangxi back in February, in the city of Beihai, roughly 100 miles away from Bobai.

Similarly, a resident surnamed Ji in Maoming City of neighboring Guangdong Province told the Chinese-language Epoch Times that he believes the ASF has spread to the city since the end of 2018 and has not been contained.

“There are basically no live pigs in our local area now,” Ji said. “The symptoms are very obvious, and the sows usually show the symptoms more quickly. They would have a high fever and stop eating, and would die in two or three days.” This is consistent with ASF symptoms.

Maoming is the largest pig-breeding city in Guangdong Province. According to Ji, pig farms are closing down one after another. But the local government has continually said that there is not a single case of ASF in Maoming. In April, it issued a ban on “abandoning dead pigs,” tacitly acknowledging that there has been a high number of pig deaths.

Central authorities have confirmed ASF cases in Guangdong Province since Dec. 19, 2018, including the first case in Zhuhai, then nearby Guangzhou and Huizhou cities.

In September 2018, China’s Ministry of Finance and Ministry of Agriculture announced that it would provide compensation to pigs farmers, either to cull pigs on infected farms or for proper disinfection and carcass disposal.

However, in areas where local governments—such as Maoming and Bobai—deny the ASF outbreak, pig farmers cannot receive such compensation.

China’s state-run media reported that nationwide, there have been 1,161 infected cases and 783 deaths as a result of ASF, for the months of March and April.

But industry insiders and Chinese farmers believe the spread of ASF is far more extensive than what the authorities portray.

“Our full expectation is that the number of cases is under-reported,” Paul Sundberg, executive director at the Swine Health Information Center in Ames, Iowa, told Reuters.

Dirk Pfeiffer, a professor of veterinary epidemiology at the City University of Hong Kong, pointed to the “spatial randomness” of China’s reported outbreaks, unusual for an infectious disease, which normally develops in clusters. He also suspects the ASF epidemic is worse than reported.

Authorities do not permit the commercial sale of African swine fever test kits. Official confirmation must come from a state-approved laboratory.

To share information, a number of pig farmers across China have formed a chat group on WeChat, a popular social media platform. One of the chat members shared screenshots of the chatroom discussions with the Chinese Epoch Times.

Pig farmer Liao Zhibiao (WeChat username) from Maoming City wrote: “The Maoming TV station dared to report that ‘currently there is not a single case of ASF in the entire city!’”

Pig farmer Yan, also from Maoming, wrote, “There are few pigs left in Maoming. Even all the sows [usually kept for breeding] have been sent to market!” The pigs that have not yet died are being slaughtered and processed into pork for sale.

“The price is so low, that it’s beyond your imagination. It’s cheaper than any fruits or vegetables on the market. I hope the government will stop telling obvious lies,” he wrote.

Another person echoed Yan, saying in the chat: “In our area alone, the number of infected pigs in one town would be higher than several hundred. Every farmer is working hard to sell all the pigs that are still alive, as the ASF will wipe out all pigs eventually. ”

Locals in Guangdong Province also have reported that there is a group of pig dealers who approach pig farmers in ASF-affected areas to purchase sick or dead pigs from them. A source who wished to remain anonymous told the Chinese-language Epoch Times that many of these pig dealers have been bargaining hard with pig farmers, then processing and selling pork or pork products to urban residents. They advertise to pig farmers that “we will resolve all your hassles and worries within one day,” and purchase the pigs at 150 yuan ($22.3) each.

The source provided the phone number of one such dealer. When the Chinese-language Epoch Times communicated with him, the pig dealer said, “however many pigs you may have, we can purchase them all.” He also mentioned that pigs may be transported to other provinces. “We have shipped several batches [of processed pork] to Henan Province already.” Henan is located in central China, about 880 miles north of Guangdong.

The ASF virus is not known to have harmful effects on humans, but some experts have expressed concerns that not enough research has been done to study its effects on the human body. Chen Bingzhong, a Chinese health expert, told the Chinese-language Epoch Times in a February interview that it could have the potential to affect one’s nervous, cardiovascular, and respiratory systems, given the typical behavior of a virus.

The netizen “Three Years” also said his parents told him about the pig dealers. “Local people don’t dare to buy pork anymore. They won’t buy at prices lowered to one yuan [15 cents] per pound,” he said. “My parents said they will not eat any pork products this year, including their favorite pork mooncakes.”