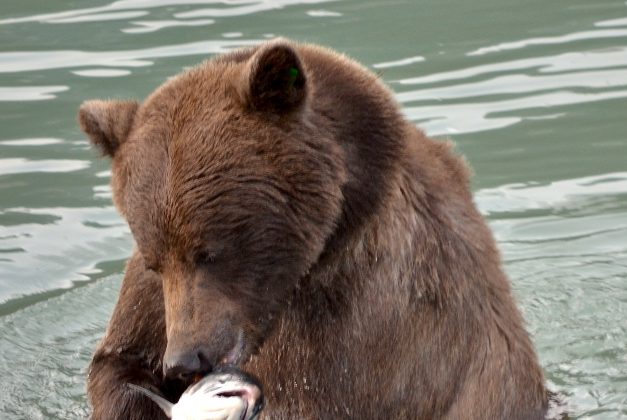 Wild salmon are valued as a sustainable seafood option for humans, but can we consider how much salmon bears and ecosystems need when setting management goals? (Jennifer Allen)
Science

A fish in the stream could be worth two in the paw, according to a new model developed by scientists to study the effect of salmon migration on ecosystems and harvests.

Pacific salmon, Oncorhynchus spp., return to their natal streams to spawn and die, but are captured en route by grizzly bears and fishers. By increasing the number that escape upstream, known as “escapement,” more salmon can breed, raising numbers in the ocean and thus long-term harvests for both bears and humans, which can benefit the environment.

“Salmon are an essential resource that propagates through not only marine but also creek and terrestrial food webs,” said study lead author Taal Levi from the University of California—Santa Cruz (UCSC) in a press release.

According to Levi, North American Pacific salmon fisheries are mostly well managed with fish counted when they arrive in coastal streams to decide allocations for harvesting and spawning.

However, concerns that overharvesting could be depleting terrestrial and aquatic food webs led Levi’s team to study the relationship between sockeye salmon, O. nerka, and 18 grizzly bear populations to ascertain how much of their diet consisted of salmon. Sockeye salmon runs are a highly regulated fishery of considerable economic significance in Alaska and Canada.

“We asked, is it enough for the ecosystem? What would happen if you increase escapement—the number of fish being released?” Levi said. “We found that in most cases, bears, fishers, and ecosystems would mutually benefit.”

When there are plenty of salmon, bears prefer to eat the eggs and brain, which are rich in nutrients, leaving the carcass to enter the ecosystem, enriching terrestrial plants and life downstream.

“Bears are salmon-consuming machines,” Levi said. “Give them more salmon and they will consume more—and importantly, they will occur at higher densities.”

“So, letting more salmon spawn and be available to bears helps not only bears but also the ecosystems they nourish when they distribute the uneaten remains of salmon.”

Of six systems studied, the four coastal ones showed that more spawning salmon produced more salmon in the ocean, as well as benefiting bears and their environment. However, in the other two, both inland on the Fraser River in Canada, allowing for bear conservation created a predicted loss of around $500,000 to $700,000 per year.

This is because coastal stocks are enriched by other salmon species, apart from sockeyes, whereas the runs of other species are small inland.

The Marine Stewardship Council (MSC) has certified these fisheries as sustainable, but its principle of minimal ecosystem impact may be being violated if lack of salmon causes bear conservation problems.

This type of analysis could be used to assess fisheries worldwide and lead to more informed management decisions that reduce ecological tradeoffs.

The article and synopsis were published in PLoS Biology on April 10.