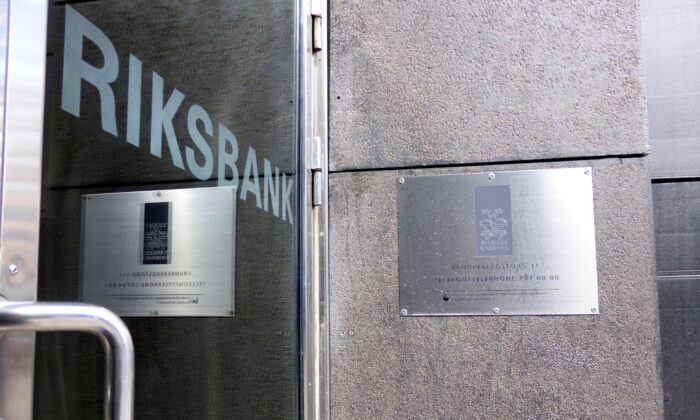 A view of an entrance of Sweden's central bank in Stockholm, Sweden, on Aug. 12, 2016. (Violette Goarant/Reuters)
Business & Economy

STOCKHOLM—Sweden’s central bank kept key policy unchanged on Tuesday and forecast the benchmark repo rate would remain at zero in coming years, showing little sign of being in a hurry to tighten monetary conditions despite a rapid recovery from the pandemic.

Sweden’s gross domestic product is back to its pre-pandemic size, inflation has topped the 2 percent target and with public restrictions coming to an end, growth is expected to remain strong.

Fiscal and monetary policy, however, remain ultra-loose and the Riksbank is reluctant to change course.

“It is important that … we continue with the expansionary monetary policy so that inflation is sustainably at our target of 2 percent,” Governor Stefan Ingves told reporters.

Tweaking policy, the Riksbank said lending facilities that were launched during the pandemic will be closed immediately and pre-pandemic collateral requirements reinstated at the end of the year.

The central bank said it expected to end asset purchases at the end of this year and keep its balance sheet more or less unchanged during 2022, in line with its previous guidance.

Analysts in a Reuters poll had forecast no change in rate policy or plans for the balance sheet.

“The Riksbank sees less risk with stimulating too much than with reducing the stimulus measures too early,” Nordea economist Torbjorn Isaksson said.

With the effects of the pandemic ebbing and inflation picking up, central banks around the world are facing tough decisions about when to start weaning economies off emergency support.

Inflation in Sweden hit 2.4 percent in August and is likely to top 3 percent in the coming months before easing back again next year.

The Riksbank could tighten policy if inflation were to risk overshooting the target significantly and persistently, but an undershoot would be trickier to deal with, Ingves said.

“In that case we are talking about negative rates or some such and many people are uncomfortable with that,” Ingves said.

Norway is likely to be the first among the G10 group of developed economies to pull the rate trigger, with markets expecting it to begin a series of hikes on Sept. 23.

The U.S. Federal Reserve could begin reducing its bond purchases later this year.