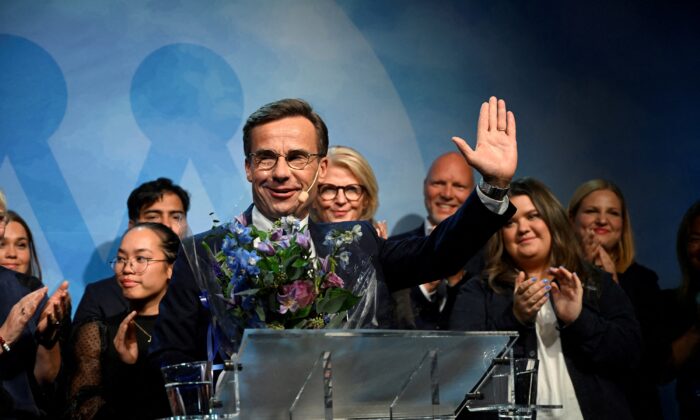 STOCKHOLM—The head of Sweden’s Moderate Party, Ulf Kristersson, said on Wednesday he would begin the work of forming a new government after Prime Minster Magdalena Andersson conceded her Social Democrats had lost the weekend’s general election.

The right-wing bloc, which includes Moderates, Sweden Democrats, Christian Democrats, and Liberals, appears set to get 176 seats in the 349-seat parliament to the left’s 173 seats, according to the latest figures from the election authority.

Their mantra that Sweden’s ills—particularly gang crime—are a result of decades of overgenerous immigration policies have hit home with many voters.

A handful of votes remain to be counted, but the result is unlikely to change significantly.

“I will now start the work of forming a new government that can get things done,” Kristersson said in a video on his Instagram account.

Kristersson said he would build a government “for all of Sweden and all citizens.”

“There is a big frustration in society, a fear of the violence, concern about the economy, the world is very uncertain and the political polarization has become far too big also in Sweden,” he said. “Therefore my message is that I want to unite, not divide.”

Though Kristersson’s party is smaller, Sweden Democrat leader Jimmie Akesson cannot get the broad backing from the right needed to oust the Social Democrats.

Kristersson is likely to try and form a government with the Christian Democrats and rely on support in parliament from the Sweden Democrats and Liberals.

The party wants to slash economic benefits for immigrants and give more powers to police.

The Sweden Democrats look set to win 20.6 percent of the vote, against 19.1 percent for the Moderates. The Social Democrats will be at 30.4 percent.

The result still has to be officially confirmed, probably by the weekend.