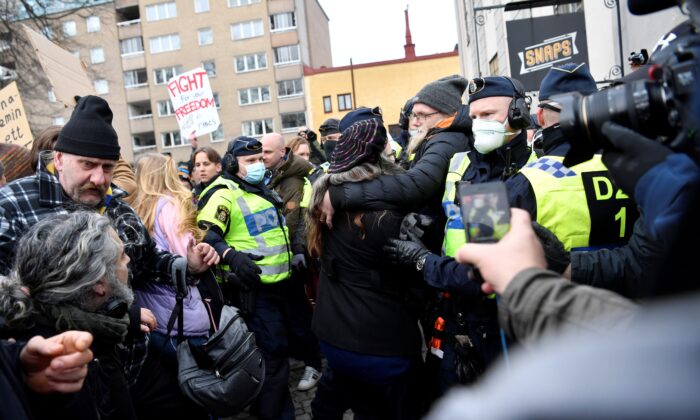 Swedish police break up a demonstration of CCP virus restrictions opponents protesting against a ban on large gatherings, in Stockholm, Sweden, on March 6, 2021. (Henrik Montgomery/TT News Agency via Reuters)
Europe

STOCKHOLM—Swedish police on Saturday dispersed hundreds of opponents of coronavirus restrictions who staged a protest in the capital Stockholm in defiance of a ban on large gatherings.

Police blocked a bridge in the centre of the city and said on their website they were in dialogue with organisers to persuade demonstrators to disperse.

TV images showed police shoving some protesters. The police said six officers were injured, one of whom was taken to hospital. Fifty people were moved on under a temporary pandemic law.

“Police have taken the decision to break up the non–authorised gathering which is ongoing,” Stockholm police said on their website on Saturday.

Earlier this week, protest organiser Filip Sjöström told local media that he was expecting around 2,000 people to join the demonstration, which had been announced on Facebook.

TV images showed hundreds of people had gathered. According to Swedish daily Dagens Nyheter, demonstrators had travelled from several parts of Sweden, which has a ban on public gatherings of more than eight people.

Sweden, which has 10 million inhabitants, registered 4,831 new coronavirus cases on Friday, and 26 new deaths, taking the death toll to 13,003.

The government said last month that it would cut opening hours for restaurants, bars, and cafes and tighten limits on the number of people allowed in shops, in a bid to ward off a third wave of the COVID-19 pandemic.