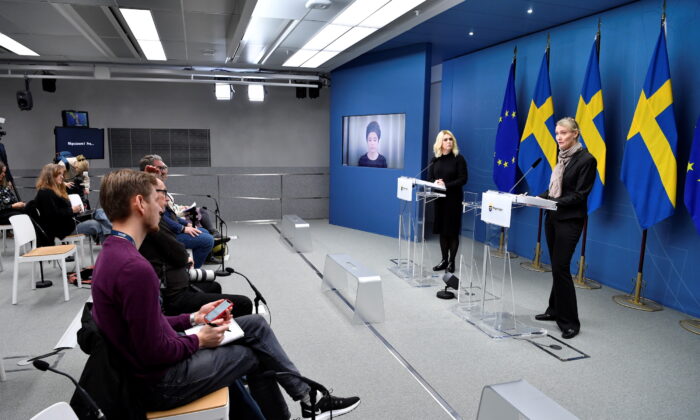 STOCKHOLM—The Swedish government plans to introduce a requirement for COVID-19 vaccine passes at indoor events where more than 100 people attend, a step recommended by health officials warning of a rising tide of infections in coming weeks.

Infection rates have soared across large swaths of Europe in recent weeks and while Sweden—hard hit at times earlier in the pandemic—has yet to record a similar surge, health agency modelling suggests infections will reach a peak in mid-December.

The center-left government was preparing a bill to be put forward to parliament with the aim to having the vaccination passes in effect from Dec. 1, Health Minister Lena Hallengren said.

“The spread is increasing in Europe. We haven’t seen it yet in Sweden, but we are not isolated,” she told a news conference. “We need to be able to use vaccination certificates.”

Sweden’s health agency said earlier on Wednesday it would reverse a widely criticized decision to stop recommending testing for people who were fully vaccinated but show symptoms of COVID-19.

Around 85 percent of all Swedes over 16 have received one dose vaccine and 82 percent have had two doses or more.

Sweden currently has the lowest number of COVID-19 patients in hospital and in intensive care in the European Union, relative to the size of the population, according to OurWorldinData, but has been hit hard by earlier waves.

Sweden has opted against lockdowns and relied mostly on voluntary measures aimed at social distancing. It has seen higher deaths per capita than its Nordic neighbors but lower than most European countries that opted for strict lockdowns.

Several aspects of Sweden’s handling of the pandemic, such as poor testing, have been strongly criticized by a government-appointed COVID-19 commission.

By Helena Soderpalm and Johan Ahlander