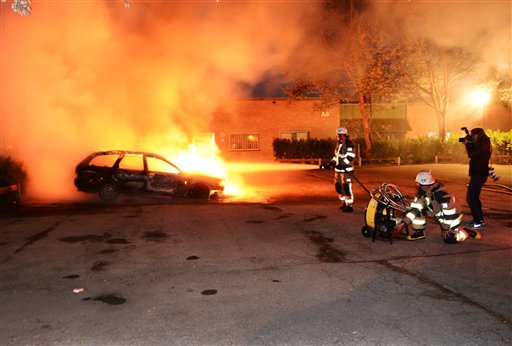 Firemen extinguish a burning car in the Stockholm suburb of Kista after youths rioted in several different suburbs around Stockholm for a third executive night, late May 21, 2013. Some 200 youths hurled rocks at police and set cars ablaze in a suburb of the Swedish capital Stockholm on Tuesday, the second day of rioting triggered by an incident in which police shot and killed a man wielding a knife. (AP Photo/Scanipx Sweden, Fredrik Sandberg)
Europe

Sweden riots: In what is thought of as one of the more peaceful countries in the world, riots have broken out and continued for four days, stunning many of the country’s citizens.

The trouble is said to have started after police officers shot a 69-year-old man in the Stockholm’s Husby neighborhood, where many residents are originally from the Middle East or Africa, according to NPR. The man allegedly threatened officers with a machete before being shot.

Riots were spreading to other low-income areas of the Swedish capital on May 22.

Police spokesman Kjell Lindgren says seven people were briefly detained early Wednesday and one person was arrested on suspicion of arson of a cultural center housed in a 19th century building.

Lindgren says 30 vehicles were set ablaze in six suburbs where mainly immigrants live. Gangs of up to 60 youths also set fire to a school and a nursery and hurled rocks at police and fire fighters.

Prime Minister Fredrik Reinfeldt appealed for calm, saying on May 21, according to Reuters, that “everyone must pitch in to restore calm.”

Although Sweden is known as a very peaceful country, one of its biggest problems is immigration policy, which some find as too restrictive.

“In segregated areas, many are disappointed about their future prospects,” Eva Andersson, co-author of Segregation and Urban Unrest in Sweden, a new study, told LoHud. “You don’t perceive the society as supportive, rather the opposite.”

Some find the blame put on the death of the older man over the weekend premature, though.

“It’s got nothing to do with the 69-year-old,” said Reber Berry, a train driver, according to AFP.