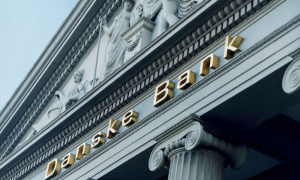 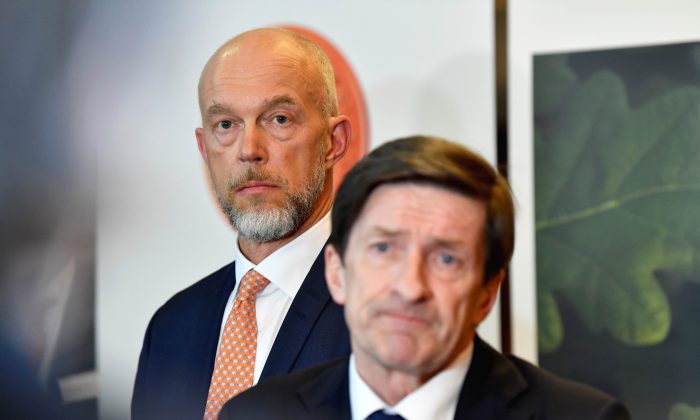 Swedbank's Acting CEO Anders Karlsson and Chairman of the Board Lars Idermark attend a news conference in connection with Swedbank's Annual General Meeting in Stockholm, Sweden March 28, 2019. TT News Agency/Henrik Montgomery/via REUTERS ATTENTION EDITORS - THIS IMAGE WAS PROVIDED BY A THIRD PARTY. SWEDEN OUT. NO COMMERCIAL OR EDITORIAL SALES IN SWEDEN.
Companies

STOCKHOLM—Swedbank dismissed Birgitte Bonnesen as chief executive on March 28 only an hour before its annual meeting after disgruntled shareholders rounded on her handling of a rapidly-growing money laundering scandal.

The lender had repeatedly said it had faith in Bonnesen to calm concerns over allegations that Swedbank’s Baltic accounts were used to launder money, but Swedish economic crime authority’s decision on March 27 to broaden its probe to cover suspected fraud proved to be the final straw for its board.

Investors had criticized Bonnesen for her communication and the way she has handled the allegations, which have sparked investigations by regulators and wiped a third off the market value of Sweden’s oldest savings bank.

“Bonnesen’s dismissal was what we wanted and was the only solution that is viable,” Ossian Ekdahl, chief active ownership officer at The First Swedish National Pension Fund, told Reuters from the annual general meeting.

The allegations against Swedbank, largely reported by Swedish TV, have linked it to a scandal at Danske Bank which faces potential lawsuits, fines, and sanctions after admitting last year that some 200 billion euros ($225 billion) of suspicious payments had flowed through its Estonian branch between 2007 and 2015.

Alecta, a shareholder on Swedbank’s nomination committee, warned it could demand further dismissals if the board did not take immediate action to restore confidence in the bank.

Shares in Swedbank were down 3.7 percent when trading was halted at the bank’s request just before Bonnesen was fired. When trading resumed after the AGM the shares extended losses and were down 8.4 percent at 1543 GMT. Fellow Swedish bank SEB was also hit, with its stock down 6.5 percent.

“I do not rule out calling an extraordinary meeting in the near future to get a new board in place,” said Magnus Billing, CEO of Alecta, which is Swedbank’s third-largest shareholder.

Alecta and fellow shareholder AP1 were among Swedbank investors who, in a rare public expression of discontent, successfully voted against granting Bonnesen freedom from liability for 2018.

Bonnesen, who was Swedbank’s chief audit executive between 2009 and 2011, which included overseeing the bank’s anti-money laundering policy, before running its Baltic operations until 2014, told Sweden’s Expressen newspaper that she had done nothing wrong.

Bonnesen said the last six months had been tough and when asked by Expressen if she felt she had done nothing wrong, Bonnesen replied: “Yes, I do.”

Investors say Bonnesen denial of any Swedbank links to the Danske Bank scandal as recently as Jan. 29 and her subsequent backtracking sowed confusion and damaged confidence in the bank.

Her decision not to initiate an external investigation was overturned under shareholder pressure and the eventual release of a heavily-redacted version of an external report was not enough to quell rising shareholder anger.

“Regardless of what the crime investigation shows, recently it has been far too turbulent for the bank to be able to focus on … managing the core business,” Billing said.

Sweden has been gripped by the scandal, which has dominated headlines and sparked parliamentary debates over the reputation of Nordic banks, which have long been held to be among the most trustworthy and least risky.

It has also stunned many Swedes, who take pride in the fact that their country is routinely ranked as one of the least corrupt in the world and boasts a level of transparency that leaves even individual tax returns in the public domain.

In a reflection of the mood among investors assembled in downtown Stockholm for the AGM, a string of critical comments by small shareholders were met with loud applause, a rarity at normally subdued corporate gatherings.

Chairman Lars Idermark said Swedbank had been honest with authorities looking into the allegations, while both he and acting CEO Anders Karlsson expressed regret over its communications.

“We will do everything we can to be as transparent as possible,” Idermark promised investors.