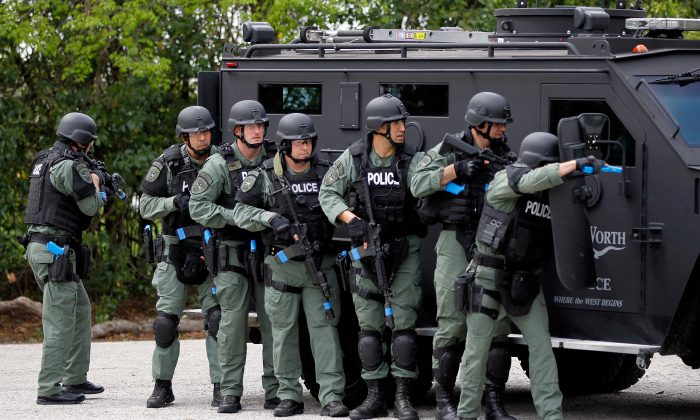 WASHINGTON—The line between military combat forces and civilian policing has been eroding in the last 30 years. SWAT teams are ubiquitous in urban centers, and even prevalent in small towns and suburbs.

American cops get military training and use equipment designed for war. Many in law enforcement are fine with this trend. Others are disturbed by the change in the character of civilian police.

Speaking on Capitol Hill on July 24 at an event sponsored by the libertarian think tank Cato Institute, Radley Balko made the case that this trend has led to numerous tragic outcomes of innocent people killed in SWAT raids. According to him, police are unwilling to change procedures to avoid mistakes.

To Balko, the SWAT team raids challenge the guarantee of the Fourth Amendment that one’s home is a sanctuary and an individual can protect himself from intruders.

Balko wrote “Rise of the Warrior Cop: The Militarization of America’s Police Forces,” published July 9. He argues that policies begun in the Nixon-era war on drugs have blurred the difference between soldier and police officer.

He also wrote “Overkill: The Rise of Paramilitary Police Raids in America,” published by Cato in 2006. His evidence comes mostly from culling local newspaper accounts of botched SWAT team raids.

A long tradition that Balko traced back to the Posse Comitatus Act (1878) prohibits using the military for civilian policing. The mindset of a soldier and a policeman were regarded as totally different. The formation and proliferation of SWAT teams has been a breach in that tradition, he says.

Balko gave examples of innocent people being killed in SWAT raids. In “Overkill,” he began with the case of Anthony Diotaiuto in Sunrise, Fla.

Diotaiuto, bartender and part-time student, sold an ounce of marijuana to an informant. A SWAT team came at 6:15 a.m. to his home to serve a search warrant. They broke down the front door and used a flash grenade designed to disorient. A few moments later, Diotaiuto lay dead in a bedroom closet from 10 bullets.

According to Balko, the police said they announced themselves before breaking down Diotaiuto’s door. They said he fled to the bedroom for a handgun, and initially said he pointed the gun at the officers. Later, the Sunrise police spokesperson said simply that the weapon was found next to the body.

Balko’s point was that the SWAT team raid was overkill.

In all likelihood, Balko suggested, Diotaiuto may have been awakened from a deep sleep, didn’t hear the police announcing their presence, and was disoriented from the flash grenade. He didn’t know that the armed intruders breaking down his door were law enforcement and he “retrieved his gun to defend himself and his property.” The outcome was not unexpected in “a highly volatile situation.”

Balko said that botched raids such as this one are not isolated incidents. Other examples of SWAT team misuse are the hundreds of raids conducted each year at a wrong address. Often the people targeted are completely innocent, unlike in the Diotaiuto tragedy. Further, the “no-knock” and “quick-knock” raids often rely on anonymous tips and “dubious informants to obtain the search warrants,” in his opinion.

There is a legitimate use of SWAT teams and forced entry when there is an immediate threat to lives, such as hostage situations, but these occasions are exceptionally rare, Balko said. Using SWAT teams for the routine execution of drug warrants, is inappropriate and disturbing, he wrote.

Balko said that today many police departments serve every search warrant with the SWAT team.

In “Overkill,” Balko wrote, “The idea of sending battalions of men dressed, trained, and armed like soldiers to do civilian police work should give us great discomfort.”

Mark Lomax, executive director of the National Tactical Officers Association, said Balko’s anecdotal evidence of SWAT team abuse was unduly critical of an effective approach to policing, but he agreed that the deployment of SWAT teams should be limited. His organization will do a study of the procedures and practices used by tactical units.

SWAT originally meant Special Weapons Attack Team but was changed to Special Weapons and Tactics to soothe people’s concerns about the word attack. Los Angeles police chief Daryl Gates is credited with first developing SWAT teams in the 1960s as elite teams to handle particularly dangerous situations. They were used for extraordinary situations such as shootouts with the Black Panther militia and the Symbionese Liberation Army in 1974.

In the 1980s, President Reagan authorized a militaristic approach to combating drug crime. He signed a directive that stated that drug trafficking was a threat to national security.

Joint task forces were created where “police forces were working directly with the military and drug interdiction efforts,” Balko said. “Reagan starts making military equipment available to police agencies to use,” and this expanded in the late 1980s and 1990s.

SWAT team deployments began to take off in the 1980s. Balko cited criminologist Peter Kraska, from Eastern Kentucky University. Kraska computed that a few hundred raids occurred annually in the late 1970s. The number grew in the early 1980s to 3,000 annual SWAT deployments. By 2005—the most recent data available—Kraska said the number is 50,000 raids per year, according to Balko.