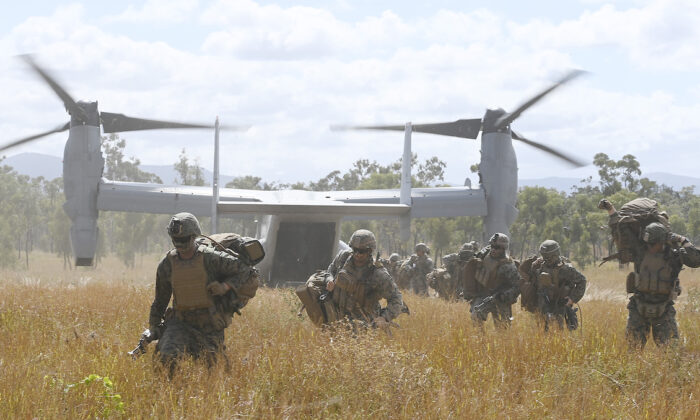 U.S. Marines disembark from a V-22 Osprey during a troop insertion as part of Exercise 'Talisman Sabre 21' in Townsville, Australia, on July 27, 2021. (Ian Hitchcock/Getty Images)
Viewpoints

Sustaining the Professionalism of the US Military

The bedrock of U.S. security, those of its allies, and stability in international politics is the U.S. military.

At a time when civil-military relations are strained by the policies of the Biden administration, by deeper tensions within U.S. society, and by the China threat, it is important to recall the importance of professionalism and its history within the U.S. military.

In his study of civil-military relations, political scientist Samuel Huntington advanced the idea of objective civilian control—the military consists of professionals who obey civilian leadership. In turn, civilians recognize the appropriate military domain. Civilian control is assured if the officer corps is permitted to develop into a highly professional institution. With objective control, officers are given the necessary autonomy for operations for which they have expertise.

While there were several profound civil-military tests during the Cold War, Vietnam was its greatest. At the outset of the U.S. military involvement in Vietnam, the Johnson administration and the Joint Chiefs of Staff (JCS) clashed over manpower levels to fight and win the conflict. U.S. Army Chief of Staff General Harold Johnson considered resigning during the Vietnam War, but he chose to remain in office, as did Marine Commandant Wallace Greene and U.S. Army General Earle Wheeler. Generals Johnson and Greene’s decisions were particularly salient as they were fighting the land war. Thus, the impact of their services was greatest, and Wheeler’s was equally important as chairman of the Joint Chiefs of Staff.

The fact that Generals Greene, Johnson, and Wheeler remained in office and faithfully executed orders was also appropriate and underscored objective civilian control. Johnson and Greene had conveyed their advice regarding necessary troop levels to fight the war. It was rejected. The president issued his orders, and Johnson and Greene faithfully followed them. The outcome was lamentable for the United States in Vietnam and particularly for the U.S. Army as it recovered from Vietnam in the 1970s. But it was a success as measured by the criterion of objective control.

Indeed, when the objective control of the U.S. military in the trying circumstances and considerable civil-military stresses of the Vietnam War is compared with the French military’s gross violations of objective control during the Algerian War (1954–1962), U.S. professionalism is underscored. The Algerian War placed similar stresses on the French military as on the U.S. military in Vietnam. Yet, the French incurred three major civil-military crises as a result.

First, the French military’s coup d’état against democratically-elected civilian leadership in 1958 brought an end to the Fourth Republic and General Charles de Gaulle to power as president in the Fifth Republic.

Second, in April 1961, there was the Algiers Putsch of the Generals (Putsch d’Algier or Putsch des généraux). In a last effort to save France’s colonial position in Algeria, and its European community and French supporting Muslims, four retired French generals supported by serving officers attempted to reverse France’s commitment to withdraw from Algeria. The Putsch collapsed after four days as the military did not support it.

Third, on Aug. 22, 1962, a serving French officer in league with another officer and civilians in a paramilitary group failed to assassinate de Gaulle and his wife over the final decision to grant Algeria independence.

The professionalism of the U.S. military in Vietnam is touted when compared with the open contempt for civilian leadership, even of de Gaulle, the hero of World War II, and the willingness of the French military to rebel through a coup d’état, an aborted Putsch, and an assassination attempt against civilian leadership in their failed Algerian war.

In the later years of the conflict there were other challenges to professionalism that ran a panoply of problems, including racial incidents and drug abuse. Falsification of aircraft and other records was also an issue, as witnessed during the covert bombing of Cambodia by tactical aircraft and B-52s. This occurred during the Johnson administration and later the 1969–1970 MENU operation, which was leaked to the press and became a scandal for the Nixon administration and Air Force.

With every military action or major national security decision, there was ample criticism, yet this rarely occurred openly. There are two notable examples. First, U.S. Army Major General John Singlaub’s 1977 public criticism of the Carter administration’s consideration of reducing the size of the U.S. commitment to the Republic of Korea. Second, at the end of the Cold War was the September 1990 firing of Air Force Chief of Staff General Michael Dugan by Defense Secretary Dick Cheney. Gen. Dugan was relieved for discussing with journalists planned decapitation targeting strategies against Saddam Hussein and other Iraqi leadership just after the start of operation Desert Storm.

The U.S. military in the Cold War was the archetype of objective control. The ethos of objective control was strong due to training in its principles as well as their adoption by officers and NCOs. As a consequence, civilian leadership could allow the military to operate in its own domain. The result was a military well able to advance and defend U.S. global interests. The force met the strategic, theater, and tactical requirements of extended deterrence against a formidable foe, and conducted the wars and interventions required to advance U.S. national security interests.

As the U.S. military confronts China while enduring a period of ideological tumult within the United States, it is essential for civilian and military leadership to comprehend the necessity of objective civilian control. In turn, this requires that each understand their respective roles, and the necessity of acknowledging military autonomy.