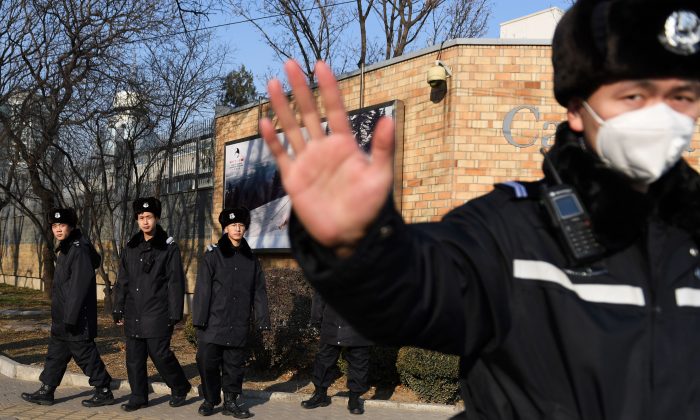 Since Huawei CFO Meng Wanzhou was arrested in Canada on charges of fraud and violating U.S. Iran sanctions, Chinese authorities have detained three Canadian citizens living or traveling in China.

The first two were charged with posing a risk to Chinese national security, while the third has been detained for illegal employment.

While Beijing has denied any link between the detentions and Meng’s case, the message is clear: They are hostages that the Chinese regime wants to use to secure the Huawei executive’s release.

Sarah McIver, the third Canadian detained in China in this month, had been teaching there for months without any problems. Foreign affairs critic Erin O’Toole told CBC News that Chinese authorities suddenly questioned Mclver regarding her visa and arrested her.

Hua Chunying, a Chinese foreign ministry spokeswoman, said Dec. 20 that McIver had received an “administrative penalty for illegal employment.” Hua didn’t provide any further information, but said McIver’s situation was different from the previous two detained Canadians, who “have been put under compulsory measures by state security on suspicion of endangering China’s national security.”

The two detainees Hua mentioned are Michael Kovrig and Michael Spavor. Kovrig is a diplomat currently on leave of absence from Canada’s foreign affairs department. He was working for the International Crisis Group, a non-governmental think tank, when he was arrested in Beijing.

On Dec. 20, it was confirmed that Kovrig also holds Hungarian nationality, which means he is a European Union citizen. The EU is China’s largest trading partner, and the arrest of Kovrig may “escalate the situation and put further pressure on China,” Reuters reported.

Spavor is a Canadian entrepreneur who runs a business promoting tourism and investment in North Korea and is reportedly close to North Korean leader Kim Jong Un. He was arrested in Dandong, a Chinese city across the border from North Korea, ahead of a planned business trip to Seoul, South Korea.

The Globe and Mail cited two of their common friends as saying that Kovrig and Spavor know each other.

All three detentions are broadly viewed as retaliation by the Chinese regime, because they were arrested just days after Beijing warned that Canada would face “serious consequences” over the arrest of Meng.

Meng is CFO and vice chairman of Huawei, one of China’s flagship telecom companies. She is the eldest child of Huawei’s founder Ren Zhengfei, and it was reported that would be the heiress to the company, which has close ties to China’s military and intelligence agency.

After Meng was arrested in Canada, the Chinese Communist Party (CCP) deployed its national security, media, diplomatic, and other channels to support Meng and Huawei. The Party is working hard to stave off Meng’s extradition to the United States.

In a Dec. 17 news brief, Hua urged Canada to “immediately rectify the mistakes.”

She said: “No matter what ridiculous pretexts they come up with, covering things up under the appearance of being legitimate cannot conceal their ignorance of the real facts and their contempt for the rule of law. People around the world are ridiculing them for this.”

But these words are more suitable to describe Chinese regime. While Meng has been guaranteed all rights allowed to her under Canadian law, including release on bail, meeting with visitors, and engaging a lawyer to represent her, none of the three detained Canadians have been afforded these legal protections.

Reuters reported that staff from the Hungarian Consulate in China tried to visit Kovrig, but were rebuffed by the authorities.

John McCallum, Canada’s ambassador to China, met with Kovrig on Dec. 14 and Spavor on Dec. 16.

Donald Clarke, a law professor specializing in Chinese law at George Washington University Law School, published an article in the Washington Post on Dec. 17, saying that the Chinese regime sees the Canadians as hostages.

Arresting foreigners, as a form of diplomatic blackmail, is a tactic commonly used by Beijing.

In 2014, Su Bin (also known as Stephen Subin or Stephen Su) was arrested in Canada on charges filed in the United States, and Canada began extradition proceedings. A month later, Chinese authorities arrested and detained a Canadian woman and her husband on suspicion of stealing state military and defense research secrets.

In September 2010, a Chinese fishing boat was involved in a conflict with a warship from Japan’s Self-Defense Force near the Senkaku or Diaoyu Islands, where China and Japan have conflicting sovereignty claims.

Zhan Qixiong, a Chinese sailor, was arrested. In response, the Chinese authorities arrested four Japanese who worked in China’s Hebei Province, on charges that they had taken photos in a military zone without a permit. To secure the release of the four detainees., the Japanese government released Zhan and returned him to China,