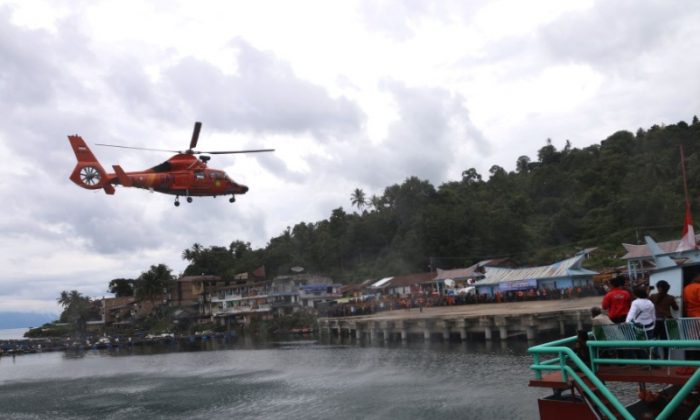 A search and rescue helicopter taking part in the search for a ferry that sank earlier this week in Lake Toba prepares to land at Tigaras port, Simalungun, North Sumatra, Indonesia June 23, 2018 in this photo taken by Antara Foto. Picture taken June 23, 2018. (Antara Foto/Irsan Mulyadi via Reuters)
Asia & Pacific

JAKARTA – Indonesian police have named four people as suspects in a criminal probe into the sinking of an overloaded ferry on a volcanic lake in which it is believed some 200 people died.

This is one of Indonesia’s deadliest ferry disasters in nearly a decade.

North Sumatra police chief Paulus Waterpauw confirmed to Reuters that the vessel’s captain and three port-and-transportation officials were being investigated for violating laws on shipping services.

“Their method was to make as much profit as possible by stuffing the vessel beyond capacity,” said Waterpauw, according to media.

Sinar Bangun, the ferry, did not have a sailing permit, was not seaworthy, and did not fulfill safety standards, he added.

The ferry may have been carrying nearly five times the number of passengers it was designed for and dozens of motorcycles. Eighteen people, including the captain, survived the accident.

Recovery teams using underwater drones on the weekend estimated the location of the sunken ferry at a depth of around 450 meters (1,476 feet).

Most victims are believed to be trapped inside. Authorities have yet to decide whether to raise the boat, as divers will not be able to descend to such depths, officials said.