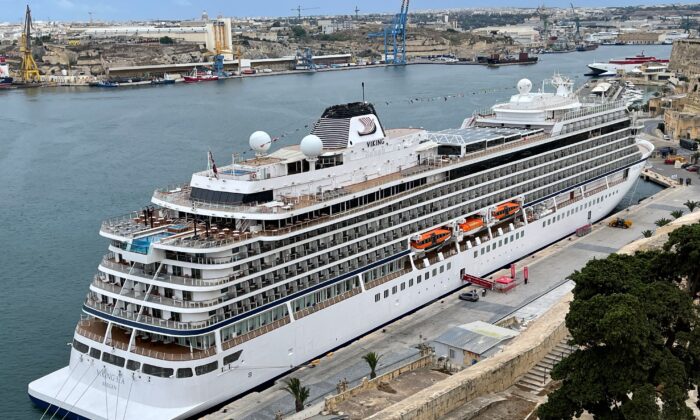 The Norwegian-flagged cruise ship Viking Sea is seen moored in the Valletta harbor in Malta on Sept. 9, 2021. (Daniel Slim/AFP via Getty Images)
WORLD

A South African crew member suspected of having the Omicron variant of COVID-19 is among the 17 cases of the virus detected on a cruise ship that disembarked in New Orleans over the weekend, the cruise line said on Monday.

U.S. officials are closely monitoring the latest variant, which has been detected in at least a third of states, to try to ascertain its severity amid a rise in COVID-19 cases in recent weeks.

Norwegian Cruise Line Holdings Ltd said the crew member on the Norwegian Breakaway vessel was in isolation for the entirety of the cruise that departed New Orleans on Nov. 28 carrying more than 3,200 individuals and made stops in Belize, Honduras, and Mexico.

Louisiana health officials said all passengers were tested for COVID-19 before leaving the ship, and those who tested positive would either travel to their residence in a personal vehicle or self-isolate in accommodations provided by Norwegian Cruise Line.

As they disembarked on Sunday, some passengers said they were not alerted about the outbreak while on board.

“I mean, they tested everybody yesterday, but they didn’t tell us,” passenger Frank Sousla told NBC. “I found out on Facebook, and I think it’s extremely irresponsible.”

At the start of the pandemic, outbreaks on ships prompted U.S. health officials to suspend cruising, leading to billion-dollar losses. The rollout of COVID-19 vaccines, combined with pent-up demand for leisure travel, have helped the industry rebound since sailing resumed this summer.

Last month, Norwegian Cruise Line forecast a return to profitability in the second half of 2022. Shares of Norwegian rose 12% on Monday, the highest percentage gain in more than a year.

All major cruise operators departing from U.S. ports, including Norwegian Cruise Lines, require guests and crew to be fully vaccinated. Norwegian also requires all guests with cruise embarkation dates through Jan. 16, 2022 to take a COVID-19 antigen test prior to boarding.

Passengers agree to accept the risks including death from traveling during the pandemic, according to Norwegian’s ticket, which recommends guests seek the advice of a doctor before boarding. The contract also specifically says passengers accept the risks of new COVID variants.

For the cruise line to be liable for any injuries caused by the outbreak, plaintiffs would have to prove Norwegian did not take reasonable care to protect passengers, said Martin Davies, the director of the Maritime Law Center at Tulane University in New Orleans.

“I’m not sure what else they could have done,” said Davies, pointing to Norwegian’s vaccination and testing requirements for passengers and staff.

The cruise line said in its statement on Monday that passengers who sailed on the Breakaway’s next trip that left on Sunday “must wear masks while indoors except while actively eating or drinking and will be tested twice during the cruise.”

Fully vaccinated guests are not required to wear masks, except on European cruises, according to Norwegian policy.

The Breakaway outbreak is smaller than others recorded in recent months by the U.S. Centers for Disease Control and Prevention, which said an increase in cruise travel has led to COVID-19 cases among passengers and crew members despite high vaccination rates in both groups.

From June 26 to Oct. 21, there were 1,359 confirmed coronavirus cases reported to the CDC by cruise ships, including several large outbreaks.

There have been instances of passengers who denied being symptomatic or waited several days to report symptoms, the health agency said.

One fully vaccinated passenger who was symptomatic for COVID-19 but denied having symptoms died three days after boarding for reasons related to the virus, according to the CDC.

By Maria Caspani and Tom Hals