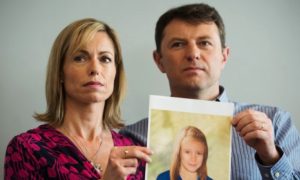 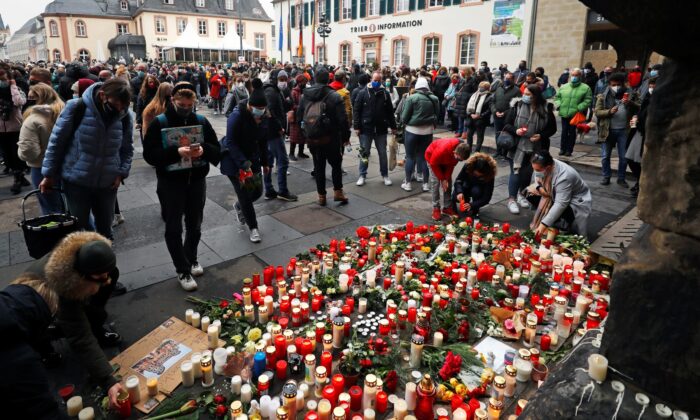 People pay their respects near the site where a car crashed into pedestrians in Trier, Germany, on Dec. 2, 2020. (Kai Pfaffenbach/Reuters)
Europe

TRIER—A 51-year-old German man suspected of murdering five people, including a baby, by plowing a speeding car into a pedestrian zone in Trier on Tuesday, is to be held in prison after a judge decided he did not need to be sent to a psychiatric institution.

The man, who had been drunk, had shown psychological abnormalities during and after his arrest on Tuesday, said the Trier prosecutor, adding an expert would examine him and issue an official opinion.

“A preliminary evaluation finds no concrete indications to completely exclude culpability,” said the prosecutor, adding he was suspected of committing five murders and attempted murder and grievous bodily harm in a further 18 cases.

“The accused is suspected of having randomly and deliberately driven at high speed in the pedestrian zone in Trier … with a Land Rover with the intention of killing or at least injuring as many people as possible,” said the prosecutor.

The motive of the suspect, not named by prosecutors but identified as Bernd W. by media, was still unclear, said the prosecutor, reiterating, however, that questioning so far had given no indication of a political or religious background.

Residents and politicians wept and hugged as they placed flowers, candles, and handwritten messages to the victims in the city’s landmark Roman gate, Porta Nigra.

“The pain of the mother who lost her child and her husband takes my voice away,” said Malu Dreyer, premier of the state of Rhineland-Palatinate, her voice breaking.

“There will never again be the laughter of the father and the child. Others who have to mourn dead feel the same way… they will have to carry this burden for the rest of their lives,” she said.