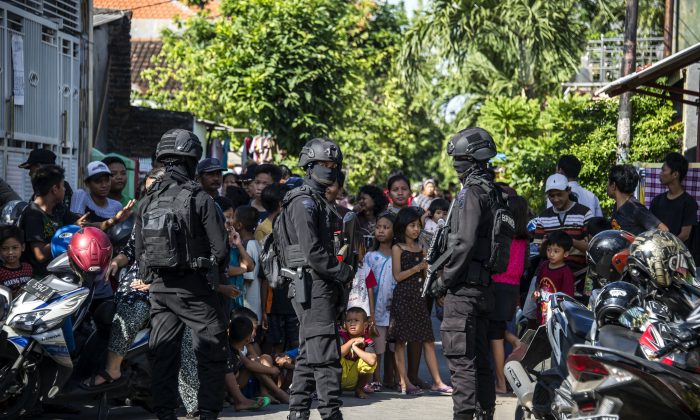 Members of the Densus 88 counter-terrorism police cordon off a road as they search a house in Surabaya, East Java province, on June 19, 2017, following the arrest of a man suspected of links with ISIS. (JUNI KRISWANTO/AFP/Getty Images)
Asia & Pacific

JAKARTA—Indonesian police shot dead two men suspected of burning down a police station complex in a jihadist-inspired attack after they fired at them with bows and arrows, officials said on Monday, Nov. 13.

All the main buildings at the police headquarters in Dharmasraya regency in West Sumatra were burned to the ground in Sunday’s attack. There were no casualties.

“We are investigating links between the fire and the two terrorists who were killed,” said national police spokesman Rikwanto, adding that a jihadist message was found scrawled on a piece of paper on one of the suspects.

He added that firefighters had found two suspects near the complex and reported them to police. The suspects tried to shoot at police with bows and arrows and were shot dead.

Police and police buildings have been the primary targets for militants in Indonesia for many years, because of a sustained crackdown by the anti-terrorism force on home-grown radicals.

Detachment 88—known locally as ‘Densus 88’—has managed to stamp out or weaken many radical Islamist networks. But the world’s largest Muslim-majority nation has seen a recent resurgence in radicalism, inspired largely by ISIS.

A series of small-scale attacks since early 2016 have been linked to ISIS, which is believed to have thousands of sympathizers in Indonesia.