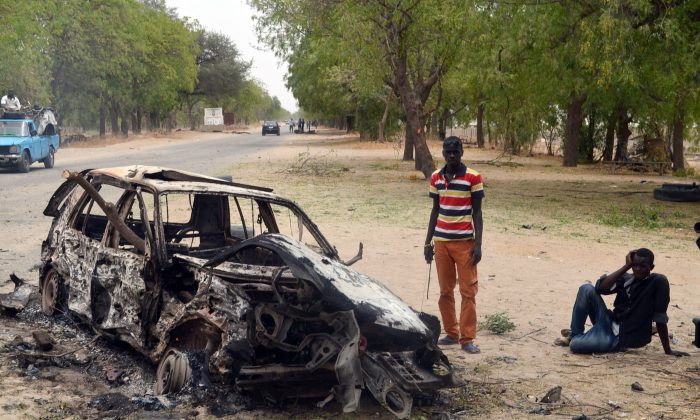 People stand by the wreckage of a car that has been blown up by suspected Boko Haram militants in Nigeria's troubled northeastern city of Maiduguri on March 25, 2014. (AFP/Getty Images)
Africa

There was no immediate claim of responsibility, but the Boko Haram group and rival Islamic State terrorists in West Africa (ISWA) splinter group have often carried out attacks in the area.

The passengers were stranded on Sunday evening at a military checkpoint due to a curfew imposed by the military in the town of Auno before the attack happened at around 2100 GMT, resident Bunu Ali who witnessed the attack said.

Auno is a town 15 miles (24 km) from Maiduguri, the state capital. An eyewitness said the insurgents attacked on motorbikes shooting sporadically. They set at least 18 vehicles ablaze and abducted several people, another eyewitness said.

President Muhammadu Buhari on Monday condemned the attack, adding that he was receiving more military hardware and intelligence to counter the current security challenges, a statement from the presidential office said.

Borno state is the epicenter of the Boko Haram and ISWA insurgency. The conflict has lasted a decade, during which time the terrorists have killed thousands. Millions have fled from their homes in the region.