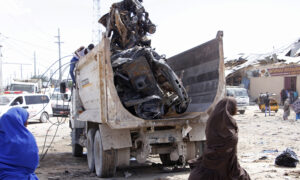 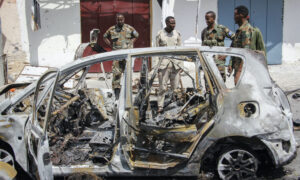 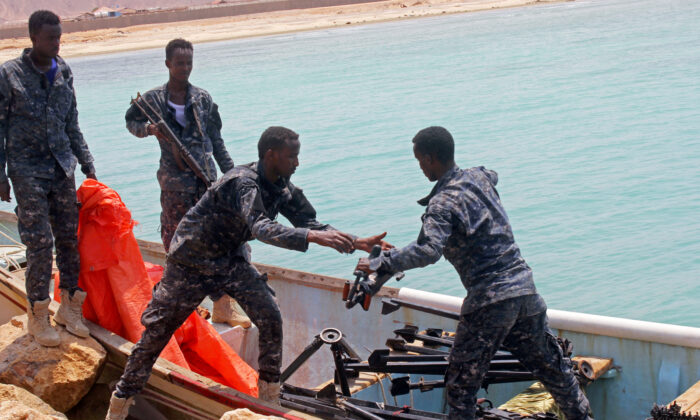 Somali Puntland forces receive weapons seized in a boat on the shores of the Gulf of Aden in the city of Bosasso, Puntland region, Somalia Sept. 23, 2017. (Abdiqani Hassan/Reuters)
Africa

NAIROBI—Somali money transfer companies moved more than $3.7 million in cash between suspected weapons traffickers in recent years, including to a Yemeni under U.S. sanctions for alleged militant links, according to a report seen by Reuters.

The findings by the Global Initiative Against Transnational Organized Crime, a Geneva-based research group, could further complicate attempts by Somali transfer companies to retain access to international banking services.

While they provide a lifeline to millions in the anarchic Horn of Africa nation, few banks will do business with them because of the risk of breaking international transparency and anti-money laundering regulations.

Asked about the report, the Central Bank of Somalia, which regulates money transfer firms, said it was unaware of the transfers but would investigate and was in general making progress in countering terrorism financing.

Contacted by Reuters, the four companies said they adhered to global “know your customer” norms, although some conceded it was difficult since Somalia had no national identity card. The firms also said they used specialist third-party databases of internationally-sanctioned individuals.

The Global Initiative analyzed almost six years of transaction records from the city of Bossasso, matching them with mobile phone records provided by security sources and database searches.

The report identified 176 transactions from the last six years that it said appeared to be linked to suspected weapons dealers in Somalia and Yemen. Nearly two-thirds were over the $10,000 threshold that should trigger an automatic report to regulatory authorities.

They include two transfers totaling nearly $40,000 to numbers linked to Sayf Abdulrab Salem al-Hayashi, after the U.S. Treasury sanctioned him in 2017 for allegedly providing weapons and financial support to al Qaeda in the Arabian Peninsula and Islamic State in Yemen, the report said.

Somalia-based Amal Express and Iftin Express handled the transactions, which used different combinations of his name and nickname, the report said.

Amal Express said a transfer slip shown in the report and allegedly linked to al-Hayashi was a forgery. Iftin Express also said the transaction slip was a fake and added that it reported all transactions over $10,000 to Somali authorities.

One man used 24 names among the four companies, the report said.

All four companies said they don’t allow customers to use multiple identities or phone numbers. Dahabshiil also said it has stopped doing transfers between Somalia and Yemen.

The companies didn’t say whether the six men named in the report are in their databases.

Apart from al-Hayashi—the only individual under U.S. sanctions—three others whose names appear in the suspect transactions were identified as suspected arms dealers in public reports by the United Nations panel of experts on Somalia.

Two were flagged—one as a proxy for al-Hayashi, and one as an arms trafficker—in a confidential annex to a 2018 report by the same panel.

Cutting companies off from banking isn’t the answer, said the report’s author, Jay Bahadur, former head of the U.N. panel of experts.

“Excluding companies from international banking services will punish families that rely on them and drive financial flows underground,” he said.

But he said companies must ensure their agents follow anti-money laundering laws and Somali authorities must improve enforcement.

“Financial regulatory bodies in Somalia are understaffed, under-resourced, and aren’t trusted by domestic financial institutions,” he told Reuters. “They receive limited reporting data and aren’t able to take many actions with what they do receive.”

He said arrests have been made for breaking anti-money laundering and terrorism financing law, citing the case of a trader convicted in August of running an unregistered bank.