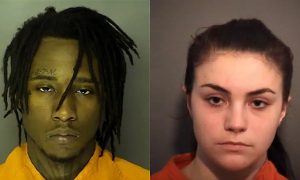 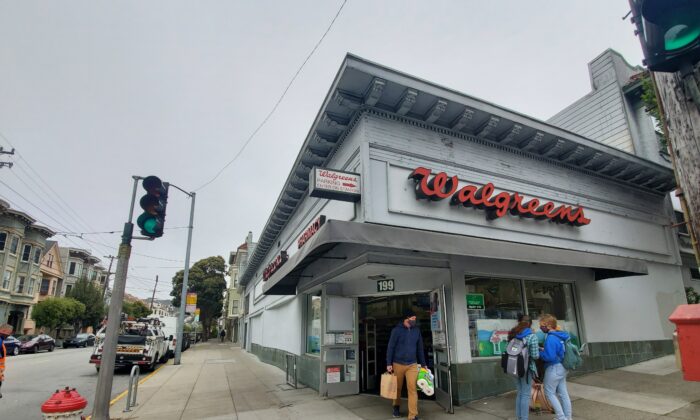 A Walgreens is still open on May 19, 2021 in San Francisco. (Jason Blair/The Epoch Times)
Northern California

SAN FRANCISCO—A San Francisco supermarket was hit by another daylight robbery on June 14. The suspect, and his trash bag, were all caught on camera.

The thief stole a garbage bag full of items from the shelves of the Walgreens store on Gough and Fell Streets in San Francisco. An ABC reporter, security guard, and another bystander also caught the robbery on camera.

The security guard tried to grab the bag, but the thief rode off with it on a bicycle. The video later went viral.

California Proposition 47 is often blamed for the increase in shoplifting. It reduced penalties for thefts under $950.

“It’s been about the last year and a half where it started to get really bad and I think it started with the election of this current district attorney and the message that has been sent by him, the dog-whistling to the criminals that certain laws will not be enforced. And we see it now coming to fruition where people can walk into stores like this and just rob the stores and take whatever they want and not have to pay for it,” Joseph Alioto Veronese, a civil rights attorney, told NTD Television.

Security guards are often told to stand down to avoid injuring anyone or inviting lawsuits against the store they are working at.

“Unfortunately, there’s zero confidence from the police to the district attorney’s office. They’re not doing their jobs because they’re fearing that they’re going to get hurt, they’re not going to take the risk that they used to take anymore, they’re checking in and they’re leaving at the end of the day,” Veronese said. “And unfortunately, it’s the citizens of San Francisco that end up suffering because we have such a broken system.”

San Francisco district attorney Chesa Boudin is often called out for not doing enough. Locals are working to recall Boudin.

“You’ve got people that are in cars, in vans, pull up outside of a store, convenience store, a chain pharmacy, and fill up their bags, fill up duffel bags, as we saw in this video that we were referencing,” Richie Greenberg, organizer of Recall Chesa Boudin 2021, told NTD Television. “This guy on a bicycle came in and filled up a big black trash bag, as much as he could, probably was worth more than $950, but no one’s really going to go and check.”

Greenberg has also seen this kind of looting happen first-hand back in February.

“There was an obvious, disheveled gentleman that was in there and he was loading up his arms with Valentine’s Day boxes of candy that are heart-shaped. And he grabbed as much as he could and he ran out around the same time I was exiting as well and came right past me,” Greenberg said.

He said there was a security guard there trying to deter the man. The thief dropped everything on the sidewalk, spoiling the merchandise.

In the past five years, 17 Walgreens stores have closed down due to rampant looting and organized shoplifting.

Neither Walgreens nor the city’s DA office responded to a request for comments.