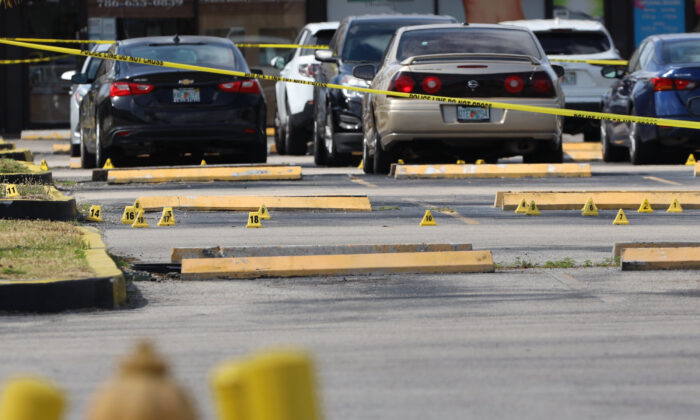 Miami-Dade police investigate a mass shooting at a concert that killed two people and injured more than 20 others in North Miami-Dade, near Miami Gardens, Fla., on May 30, 2021. (Carl Juste/Miami Herald/TNS)
US News

By David Ovalle
From Miami Herald

MIAMI—Miami-Dade prosecutors have dropped the case against one of the suspected gunmen in a North Miami-Dade banquet hall mass shooting, saying homicide detectives improperly got a confession after he asked for an attorney.

The state on Wednesday chose not to formerly charge Warneric Buckner, 20, of Miami Gardens, with three counts of first-degree murder and 20 counts of attempted murder.

Buckner was believed to be one of three men in ski masks who got out of a stolen Nissan Pathfinder and opened fire on the crowd outside El Mula Banquet Hall on May 30. The men ran back to the SUV—as others in the parking lot fired back.

Killed in the shooting were Desmond Owens and Clayton Dillard III, both 26, and Shankquia Lechelle Peterson, 32. Twenty people were wounded outside the hall, which was hosting a rap show; investigators believe the shooting was the escalation of a feud between rival gangs from North Miami-Dade.

Then in early October, police arrested Buckner after he reportedly confessed he was a passenger in the front right seat of the SUV. He admitted he was “armed with a large firearm” and “fired into the crowd but could not recall how many shots he took,” according to an arrest report.

But prosecutors, in a memo on the case, said that after reviewing Buckner’s recorded statement, he “initially invoked his right to counsel, and despite the invocation, homicide investigators with the Miami-Dade Police Department continued to conduct an interrogation.”

In their memo, prosecutors Michael Von Zamft and Chris Flanagan wrote the confession could be “subject to suppression” by a judge, and could be deemed “inadmissible evidence. “Ethically, the State of Florida is constrained from making any argument against suppression where the case law clearly mandates the exclusion of the statement,” they wrote.

The state said the case remains open and prosecutors will “consider pursuing charges at a later time as additional evidence is uncovered.”

Buckner’s defense attorney did not return a request for comment.

Miami-Dade Police Director Alfredo “Freddy” Ramirez, in a statement, said he was “disappointed and saddened” to learn from prosecutors that the confession was “deemed inadmissible.”

“We will continue investigating to ensure that justice is served on all that are responsible for this heinous crime,” he said.