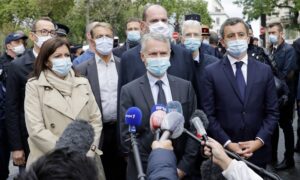 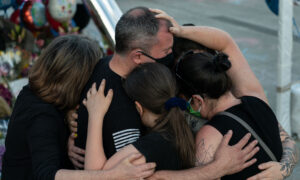 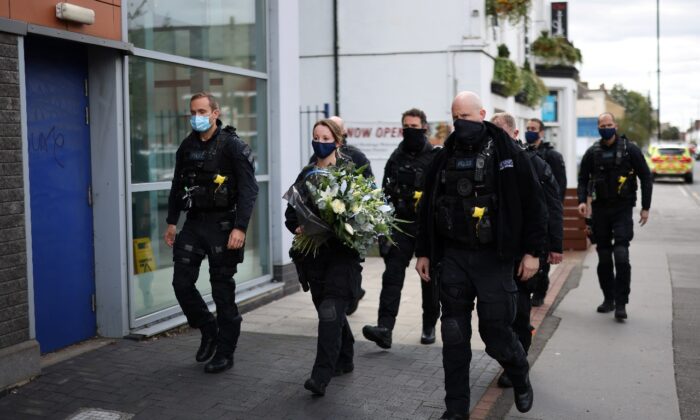 Police officers arrive to pay their respects at the custody center where a British police officer has been shot dead in Croydon, south London, Britain, on Sept. 26, 2020. (Simon Dawson/Reuters)
Europe

The 23-year-old suspect in the fatal shooting of a British police officer inside a police station remains in a critical condition in hospital and has not yet been spoken to, a senior officer said on Saturday.

Matt Ratana, a 54-year-old custody sergeant who was originally from the Hawke’s Bay area of New Zealand, was shot dead in the early hours of Friday by a man who was handcuffed. The man is then believed to have turned the gun on himself.

Deputy Assistant Commissioner Stuart Cundy told reporters he had recovered the gun, plus CCTV and body-warn video taken at the time of the shooting. “Our specialist investigators are carefully reviewing all of that footage,” he said.

The incident has been referred to the Independent Office for Police Conduct (IOPC), which said the suspect had been arrested for possession of drugs and ammunition.

“The man was handcuffed to the rear before being transported to Croydon Custody Suite in a police vehicle where he was escorted into the building,” it said in a statement.

The handcuffs remained in place while officers prepared to search him using a metal detector, the IOPC said. At that point, shots were fired.

The killing of an officer is rare in Britain and the murder drew condolences from the prime minister and other senior politicians.