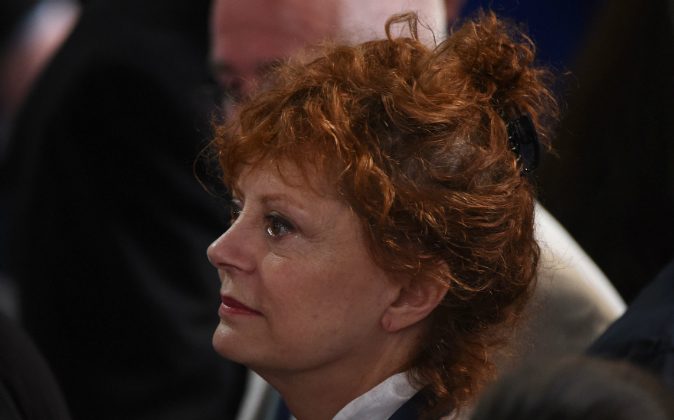 Actress Susan Sarandon looks on during Day 1 of the Democratic National Convention at the Wells Fargo Center in Philadelphia, Pennsylvania, July 25, 2016. (ROBYN BECK/AFP/Getty Images)
US News

Actress Susan Sarandon has apologized after making a controversial Twitter post that mocked a funeral for a slain NYPD officer.

On Feb. 4, the Oscar-award-winning actress wrote: “I deeply regret the meme I recently shared on Twitter that included a photo of Officer Jason Rivera’s funeral.”

“I reacted quickly to the picture without connecting it to a police funeral and I realize now how insensitive and deeply disrespectful it was to make that point at that time,” said Sarandon, a longtime left-wing activist who supported Sen. Bernie Sanders’ two presidential campaigns. “I sincerely apologize to the family of Officers Rivera and Mora for causing additional pain during their time of grieving.”

Sarandon, 74, sparked outrage after she mocked the funeral, which showed the procession for Rivera, by writing on Twitter that “I’m gonna tell my kids this is what fascism looks like.”

Both Rivera and his 27-year-old NYPD partner, Wilbert Mora, were shot and killed while responding to a domestic dispute in Harlem. Mora’s funeral was held about a week prior to Rivera’s funeral, with both drawing thousands of NYPD officers.

“This is what privilege looks like: a wealthy actress, safe in her bubble, mocking heroes & making light of the crisis that cops are battling alongside our communities. NYC is uniting to stop the violence — @SusanSarandon is living on a different planet,” it wrote.

The National Order of Fraternal Police added: “Of all the days for @SusanSarandon to share her true feelings towards police, she picks the day we bury our fallen brother to make such inflammatory & brainless comments. When you spend more time hating on cops than you do your own career, it’s no wonder why you’re a D-list actor.”

Mora and Rivera were shot after a woman called 911 and reported she was having an altercation with one of her sons inside her Harlem apartment, NYPD Chief of Detectives James Essig said in a late January news conference.

When they arrived, 47-year-old Lashawn McNeil was in the apartment bedroom, officials said. He abruptly opened the door when the two officers approached and opened fire.

As McNeil ran away from the scene, a third officer fired and struck him. McNeil was later pronounced dead at a nearby hospital.

In New York City, seven NYPD officers have been shot and two have died so far in 2022, according to news reports.