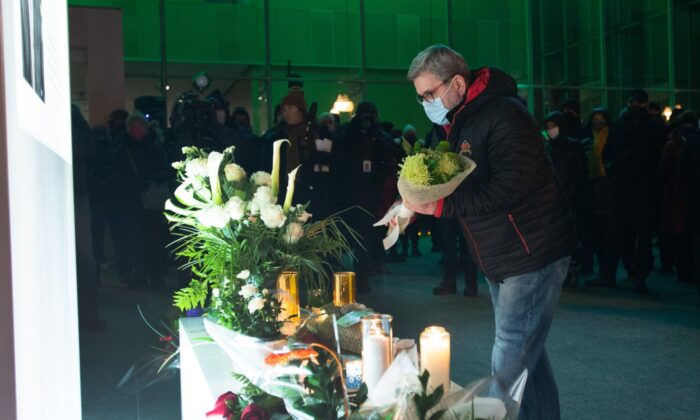 Quebec City Mayor Regis Labeaume lays flowers at a vigil to honour Francois Duchesne who was stabbed to death on Halloween night by a man with a sword, November 3, 2020 in Quebec City. (The Canadian Press/Jacques Boissinot)
Canada

A man who was out for a walk in Quebec City on Halloween night 2020 told a court today he first thought it was a joke when a man wearing a disguise and brandishing a sword approached him.

But Rémy Bélanger testified the man then raised the sword and he felt blows to his head, hand and back, resulting in injuries that required two weeks of hospitalization and three months in rehabilitation.

Bélanger was one of three victims to testify today about the stabbing rampage that claimed the lives of Suzanne Clermont, 61, and Francois Duchesne, 56.

Twenty-six-year-old Carl Girouard is charged with two counts of first-degree murder and five counts of attempted murder in connection with the attack.

The judge has told jurors that Girouard admits to the physical acts but will argue he was not criminally responsible at the time of the events because he was suffering from a mental disorder.

The trial resumed today with 11 jurors after being suspended last Wednesday due to COVID-19 cases among the panel.

Quebec Superior Court Justice Richard Grenier said today he appreciated the lawyers’ efforts to speed up the proceedings, in the midst of the sixth wave of the COVID-19 pandemic.