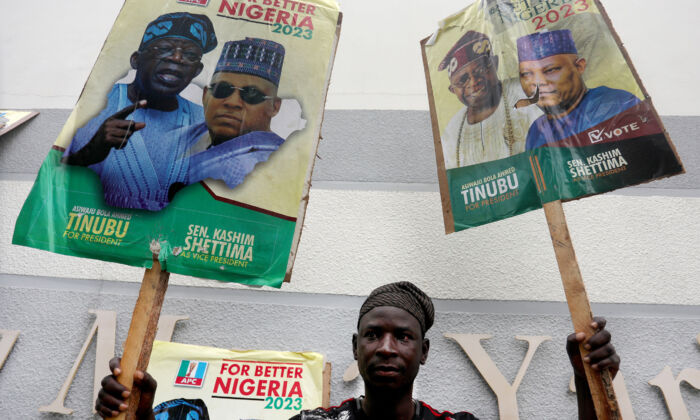 A supporter of Nigeria's All Progressive Congress (APC) ruling party holds posters of APC presidential and vice-presidential candidates outside a party meeting in Abuja on July 20, 2022. (Photo by Kola Sulaimon / AFP via Getty Images)
Africa

Survival on the Ballot in Nigeria’s High-Stakes Election: Church Leader

Next year’s presidential elections in war-torn Nigeria are a “do-or-die situation” for embattled Christians, according to a spokesman for a church association in the northern part of the country.

“We either confront the evil in this country at the ballot box in February or we perish,” Rev. John Hayab, president of the Christian Association of Nigeria chapter in Kaduna state, told The Epoch Times.

“We have to do something to save this country before it dies,” he said, noting that, on average, 12 Christians die in Nigeria every day due to sectarian attacks, according to Open Doors.

“The terrorists want to instill fear in Christian voters, but we must not give in to fear,” he said. “I am telling pastors and the faithful that the Christian community leaders must serve as the watchmen as our people go to vote.”

The Nigerian federal government has been scrambling to register voters in 36 states, as millions have been displaced by terrorist violence and need new voter cards.

During the previous election cycle, in February 2015, voting was postponed for a week because of a series of terrorist massacres.

Last month, spectacular attacks in the capital territory included a massive jailbreak and an ambush of the president’s elite guards.

Tensions between Nigeria’s majority Christian south and majority Muslim north have been constant since independence from the United Kingdom was declared in 1960.

Most national governments have been headed by northern Muslims, whether popularly elected or as heads of military governments following coups.

The Nigerian Constitution was amended in 1999 to declare that power-sharing across ethnic and territorial lines shall be required.

“The composition of the government of the federation, or any of its agencies, and the conduct of its affairs shall be carried out in such a manner as to reflect the federal character of Nigeria and the need to promote national unity, and also to command national loyalty, thereby ensuring that there shall be no predominance of persons from a few state or from a few ethnic or other sectional groups in that government or in any of its agencies,” the constitution states in Article 14.

The meaning of the term “federal character,” is explained in The Journal of Federalism.

“The ‘federal character’ principle, which has been enshrined in Nigeria’s constitution since 1979, seeks to ensure that appointments to public service institutions fairly reflect the linguistic, ethnic, religious, and geographic diversity of the country.”

Nigerian political parties have attempted to honor the principle of religious and regional balance by choosing their presidential and vice presidential nominees from diverse religious backgrounds—until this year. The powerful ruling party of President Muhammadu Buhari has assigned both positions to Muslims, sparking the ire not only in Nigeria but among expatriates in the United States.

A power-sharing arrangement set up by the military government in 1999 has been scrapped by the ruling All Progressives Congress (APC) and its chief rival, the People’s Democratic Party (PDP), according to critics such as Hayab.

“Our call for fairness and the balancing of the [APC] presidential ticket for the sake of justice, unity, and fairness apparently fell on deaf ears,” he told reporters in mid-July.

Critics included leaders of the APC itself.

“This is a calculated anti-Christian exclusion agenda that is being implemented,” Babachir Lawal, a northern Christian, said at a meeting of APC Christian members in Abuja on July 29.

Human rights attorney Emmanuel Ogebe is outraged that both major Nigerian parties have nominated Muslims as presidential candidates, even after eight years of a presidential administration in which the threats to Christians have increased year by year.

That Abubakar is from the same Fulani tribe as Buhari strikes Ogebe as unseemly.

Ogebe joined a coalition of Nigerian pastors in Houston who protested that move to Rep. Sheila Jackson Lee (D-Texas), who has longstanding concerns about Nigeria.

“Both Nigeria’s main political parties have nominated Muslims as their presidential candidates in next year’s elections in violation of a longstanding political convention where power rotates between the north/south Christian/Muslim,” according to a letter from the Greater Houston Ministers’ Fellowship.

“However, Gen. Buhari’s ruling party, the APC, went a step further and has nominated a Muslim president and, in addition, a Muslim vice president in total negation of another time-honored convention of balancing and fair representation.”

Disgruntled voters have rallied behind a third-party challenger named Peter Obi, a devout Roman Catholic and a member of the Igbo tribe that dominates Nigeria’s southeast region.

Obi heads the Labor Party, which has a base in the southeast but, unlike APC and PDP, lacks a national network of supporters. While he has drawn huge crowds, election observers say that Obi’s lack of a well-staffed organization in 36 states may leave too high a hill for him to climb.

The federal government’s effort to gain trust during the election period of the Christian south and the Muslim north is more consequential in Nigeria than ever before because of growing separatist movements.

Recent incursions by terrorists into the federal capital territory of Abuja have targeted Buhari himself, yet the nexus of the bandit gangs with jihadist insurgencies such as “IS of West Africa,” or the al-Qaeda affiliate known as Ansaru, remains debatable.

During the past year, the notorious “IS of West Africa,” and sometimes Boko Haram, has been blunted in northeastern states. Counter-insurgency has significantly suppressed the threat from Boko Haram, with the Islamist group mounting only 64 attacks in 2021.

Bandit gangs don’t preach a well-defined ideology but are known to invoke jihad during attacks, according to David Otto, a London-based military expert, and other subject specialists.

Jihadist terrorists allied with thousands of bandits have forced their motorbike brigades into Abuja with impunity since July 5, when 700 hardened criminals were freed from a maximum security prison at Kuje.