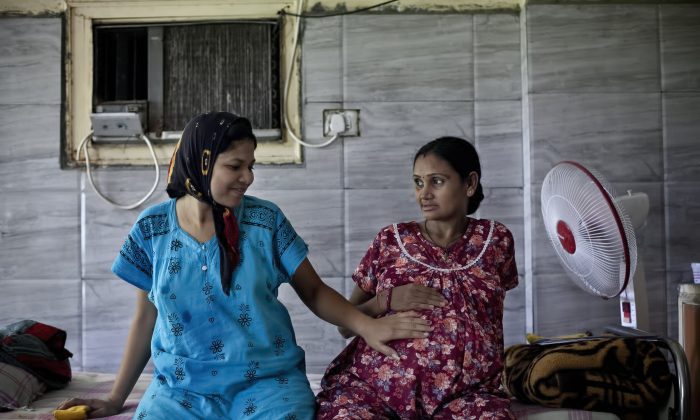 In this Nov. 2, 2015 photo, 30-year-old Bhagwati Chauhan, who gave birth to a Canadian couple's child on Oct. 27, touches the 9-month pregnant belly of 35-year-old Chandrika Makwana, who is carrying twins for an American couple, at the Akanksha Clinic, one of the most organized clinics in the surrogacy business, in Anand, India. Chauhan, whose husband died recently, plans to use the money she will earn as a surrogate to buy a house and send her son to school. The Indian government recently banned surrogate services for foreigners and ordered fertility clinics to stop the practice of hiring Indian women to bear children for them. (AP Photo/Allison Joyce)
Asia & Pacific

NEW DELHI—For thousands of childless couples the world over, India has been the go-to destination to fulfill their dreams of becoming parents, thanks to its well-trained doctors, well-appointed fertility clinics, and vast numbers of poor women willing to serve as surrogate mothers.

The Indian government recently banned surrogate services for foreigners and ordered fertility clinics to stop the practice of hiring Indian women to bear children for them. It’s said to be intended to protect the women from exploitation, though some who have worked as surrogates say the ban actually hurts them.

“Becoming a surrogate mother is our one chance to build a house, or get a new roof. We earn more from one surrogacy than from 10 years of working as domestic help,” said Tina Rajesh Chavan, speaking over the telephone from Anand, a major hub of fertility clinics, in the western Indian state of Gujarat.

India was among the few countries in the world that allowed surrogacy—where a woman could be hired to carry the child of a couple through a process of in-vitro fertilization and embryo transfer.

India’s home ministry has ordered Indian embassies abroad not to grant visas to couples visiting the country for surrogacy, or “reproductive tourism” as the practice has come to be known.

Though laws governing surrogacy have yet to be passed, the government outlined its position in an affidavit placed before the Supreme Court on Oct. 28. It said India “does not support commercial surrogacy and the scope of surrogacy is limited to Indian married infertile couples only, and not to foreigners.” A previous order had already barred gay and unmarried couples and single people from hiring surrogates.

A government official, who spoke on condition of anonymity as he was not authorized to speak to the media, said the tightening of rules concerning surrogacy was to protect poor women from being exploited in the absence of legal safeguards.

Chavan, who served as a surrogate mother for two foreign couples, said her earnings through the two surrogate pregnancies ensured that her three children were able to complete their high school educations.

“Were it not for the surrogacy money, I would have had to pull them out of school,” the 35-year-old said. She currently works as a nanny helping parents look after their newborn surrogate babies during the time they are waiting to obtain visas for the infants.

“This ban does not help anyone. It has closed the door for poor people like us to earn a little money,” Chavan said.

Some women’s rights activists say India’s burgeoning surrogacy business should be regulated, not outlawed. Banning it, they say, will only drive it underground.

“In the last decade, fertility clinics that carry out surrogacy have come up everywhere—in the major metros as well as in small towns. And with it, there is a growing tribe of agents—men who procure poor women to serve as surrogates,” said Manasi Mishra, a New Delhi-based researcher and author of two government-funded reports on surrogacy in India.

“These men are not going to give up their professional business. The whole practice will go underground, and it will be very hard to check the exploitation of the women hired as surrogates,” Mishra said.

Since India legalized commercial surrogacy in 2001, thousands of fertility clinics have mushroomed across the country, making it a $1 billion to $2.3 billion business annually. Although there are no official figures available, a 2012 U.N. report said there were around 3,000 fertility clinics in India.

The clinics have attracted couples from Britain, the United States, Australia, South Africa, and Japan. A surrogate pregnancy costs around $20,000 to $35,000 in India, compared to around $150,000 in the United States, where surrogacy is permitted in many but not all states. Other countries that allow surrogacy include Russia, Georgia, and Ukraine.

Thailand also had been a popular destination for those wanting a baby through surrogacy, but after recent scandals involving foreign clients, the country passed a law in August banning commercial surrogacy.

Activists in India say that while the industry has proliferated, a lack of safeguards has led to rampant exploitation of thousands of poor, illiterate women by touts, agents, unscrupulous doctors, and the owners of fertility clinics.

Most often, the woman doesn’t even know what she is signing, except that her womb will be used to carry a baby.
— Ranjana Kumari, director, Center for Social Research

They say women may be paid far less than promised, with agents getting much of the cash and clinics taking deductions for everything from food to medical tests. Multiple embryos may be implanted without the woman’s knowledge. Almost all babies are delivered by cesarean section, no matter whether it is medically necessary.

“Most often, the woman doesn’t even know what she is signing, except that her womb will be used to carry a baby,” said Ranjana Kumari, director of the New Delhi-based Center for Social Research.

The surrogates are supposed to be at least 21, but agents persuade families to let girls as young as 16 become surrogate mothers, providing them with fake certificates showing them as older than their real age.

Kumari said strong regulation of the industry “would benefit all the concerned parties—the commissioning parents, surrogate mothers, and the child born of such an arrangement.”

After long years of deliberation, India has reached the final stages of readying a law governing surrogacy for Indian couples. The legislation would bar the use of agents, require couples seeking surrogacy to pay all of the surrogate’s expenses, and allow only women between the ages of 21 and 35 to act as surrogate mothers. It also says that women who have had more than five live births cannot serve as a surrogate. The Indian Council of Medical Research is seeking public comment on the proposed legislation before Parliament votes on it.

Many women who agree to become surrogates view the job as an exceptionally rare way for them to make a large amount of money. For 26-year-old Christina Christian, it’s a way to earn enough to buy her own home.

She’s living in a dormitory in Anand with scores of other young women hired as surrogates for foreign couples. It’s run by the Akanksha Clinic, whose workers regulate the activities of the surrogate mothers, ensuring that they take their meals and vitamin supplements, and that they do nothing that could jeopardize their pregnancies.