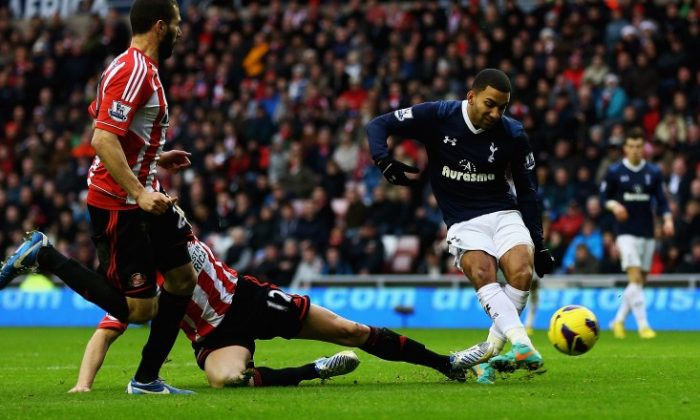 Tottenham Hotspur struck for two goals in three minutes early in the second half to seal only the club’s second win in eight attempts at Sunderland’s Stadium of Light in Saturday’s Barclays Premier League lunchtime kickoff.

It was a highly satisfying result for Spurs manager Andre Villas-Boas, extending the team’s impressive run while ending the host’s mini-revival. The home side did take the lead in the first half, though arguably against the run of play, but an own-goal from the unfortunate Carlos Cuellar and an opportunist strike from Aaron Lennon early in the second period won the match for the visitors.

In the light of Sunderland’s upset win over champions Manchester City on Wednesday, which gave them back-to-back wins for the first time this season, Sunderland boss Martin O’Neill declared prior to the match, “We go in with great heart.”

Spurs also received a Boxing Day boost with that convincing 4–0 win over an Aston Villa side in the midst of a downward spiral.

The “Black Cats” were without fullback Danny Rose, who was unavailable under the terms of his loan agreement with parent club Tottenham, although John O’Shea returned to take the captain’s armband after missing the Boxing Day triumph over Manchester City through illness.

Clint Dempsey and Tom Huddlestone made the Tottenham bench after recovering from groin and knee injuries respectively. England midfielder Scott Parker was also a substitute once again following his recovery from a long-term Achilles problem.

Mousa Dembele was passed fit, despite coming off against Aston Villa, while Michael Dawson and Steven Caulker were preferred to William Gallas and Jan Vertonghen at the center of the Tottenham defense.

But all eyes would be on Gareth Bale after his sparkling hat-trick against Villa.

Interestingly, at the start of play, both clubs were occupying the same positions—Sunderland 13th and Spurs 4th—in which they ended last season’s campaign.

The match got off to a lively start with the first chance falling to Emmanuel Adebayor, but he was always stretching for the ball and his weak attempt merely served to give Simon Mignolet in the Sunderland goal a welcomed early touch.

A Craig Gardner free kick at the other end similarly failed to trouble Hugo Lloris in the Spurs goal.

By the 20-minute mark, Spurs had pretty much taken control, winning a succession of corners and putting Sunderland under pressure. On 21 minutes, a fierce Sandro drive from the right-hand corner of the Sunderland penalty area was too hot to hold, but Mignolet was fortunate in being able to hold on at the second attempt.

Five minutes later a deft flick from Adebayor was blocked by Mignolet then, on the half hour, the same player was unlucky to hit the crossbar from point blank range.

To the casual observer it might have looked like a bad miss, but credit must be given to Mignolet who did just enough to make it difficult for Adebayor.

Sunderland’s moment came five minutes before the interval. An injudicious foul by Kyle Walker gave Seb Larsson the opportunity to curl in one of his specials from the left flank.

Steven Fletcher had the first attempt, which was well parried by Loris, but skipper John O’Shea was on hand for a rare collector’s item and lashed home the rebound.

Sunderland began the second half with intent but it was the visitors who soon reestablished control and took the lead.

On 48 minutes, Spurs finally received some reward for their enterprising play courtesy of Cueller who suffered the misfortune of back-heading the ball into his own net from a Spurs corner. It was a good illustration of what can happen when a quality ball with swerve and pace is delivered into the right area.

Just three minutes later, some indecision in the Sunderland rearguard, combined with a lucky rebound and Lennon’s pace, allowed the England winger to nip in ahead of a pair of defenders and slot the ball past Mignolet for the go-ahead goal.

Sunderland attempted to come back with Adam Johnson, who was not having one of his more inspiring days in the wake of his heroics against Manchester City, firing in a low drive that was well stopped by Lloris.

But, for the most part, Spurs remained firmly in control of proceedings and should have put the game beyond the home side on the hour mark.

A trademark run from Bale split Sunderland wide open before the Welsh wizard rolled a square pass across the 6-yard area for the advancing Jermain Defoe. Mignolet somehow managed to scramble across and foil the striker with an amazing block, and the ball was then hooked to safety.

Even though not at his absolute best, Bale continued to torment Sunderland and was unlucky to receive a yellow card for allegedly diving in the box.

With the benefit of slow motion replays from different angles not available to the officials, it appeared that referee Martin Atkinson had got this one wrong and that there was indeed contact on Bale from Gardner’s knee.

Sunderland huffed and puffed for the final 10 minutes, but failed to penetrate a resolute Spurs defense and create a clearcut opening.

So it was disappointment for the home supporters after their Christmas cheer, while everyone in the Tottenham camp was clearly delighted with the progress being made which has now taken them up into third place in the table pending other results this weekend.