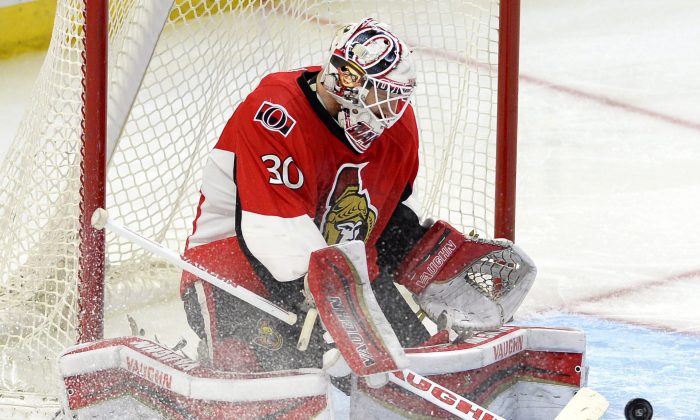 Ottawa Senators' goalie Andrew Hammond makes a save against the Buffalo Sabres in Ottawa on March 6, 2015. (The Canadian Press/Justin Tang)
Canadian Content

The Ottawa Senators are playing their best hockey of the season and have put themselves in position to compete for the final wild card spot in the NHL’s Eastern Conference, all on a shoestring budget.

The wins started coming with the introduction of previously unknown goalie Andrew Hammond against the Montreal Canadiens on Feb. 18 and momentum picked up over a three-game sweep of California. But it also came down to the team getting key pieces of their future settled and blossoming under new head coach Dave Cameron.

Ottawa was nine points out of the final playoff spot at the start of their West coast road trip. Now they are five out with a game in hand against their target, Boston, with 18 games left to play. The Sens host the Bruins twice before the end of the season, including Tuesday night.

Boston is currently on pace for 96 points and the final wild card spot.

Ottawa needs to finish their final 18 games with 25 points (a record of 12–5–1, for example) to match Boston’s projected end-of-season point total. It’s a tall order, but the Sens are currently the NHL’s hottest team (8–1–1 in their last 10 games).

Also in the mix is Florida, but things look dire for Philadelphia and New Jersey.

Florida needs to go 12–4–0 to reach 96 points. The team that acquired Jaromir Jagr at the trade deadline for the playoff push faces a steeper climb than Ottawa.

The Sens play 10 of their final 18 games at home, with eight against teams that are out of the playoff positions currently.

We attempted to do one or two minor things.
— Ottawa Senators GM Bryan Murray at trade deadline

One of the big problems for the Sens has been inconsistent goaltending from backup Robin Lehner. After No. 1 goalie Craig Anderson suffered a hand injury in late January, Lehner started the next nine games and the Sens went 3–5–1. Of course, Lehner is not solely to blame, but the contrast with Hammond’s arrival has been spectacular.

Hammond, aka “Hamburglar,” has started his NHL career 7–0–1 with a .956 save percentage and 1.33 goals against average. But the good news is Anderson returned from injury to face Calgary on Sunday. He played well through two periods, but looked shaky in the third.

Long-term, Anderson is a proven performer, and while Hammond exceeded all expectations, Anderson is the man to pick up where Hammond left off, if the Sens want playoff hockey.

The Sens are a very thrifty team transitioning from the trade of top centre Jason Spezza and departure of Daniel Alfredsson. But most of the pieces of the puzzle to reach the playoffs lie within the organization.

General manager Bryan Murray stood pat at the NHL trade deadline. “We attempted to do one or two minor things,” he said in his press conference shortly after 3 p.m. on March 2. He wasn’t going to be tempted to disrupt his long-term plan for a playoff push this year.

Ottawa has depth on defense, but things look a lot better after re-signing Marc Methot. Since his return from injury and pairing with former Norris Trophy winner Erik Karlsson, the Senators are 14–8–3. A solid, reliable No. 2 defenseman is a massive piece of the puzzle.

Ottawa has two top-five players in rookie scoring in Mike Hoffman and Mark Stone. But these rookies are also responsible defensively and are 1 and 2 on the team in the plus/minus stat. Both are relatively late round draft picks that have really picked up their games recently. Stone has 10 points in his last nine games and Hoffman has nine in his last nine.

Hoffman leads the team in scoring with 24 goals and has great speed and a terrific wrist shot. Stone is great at going to the net and has the size and strength to be very effective on the boards.

Ottawa’s first-round pick from 2011, Mika Zibanejad, has a point in each of his last seven games. While he’s had some ups and downs, which is understandable for a young player, it’s looking like he belongs as a centre on one of the top three lines.

The Sens are a well-balanced team and while lacking a top-line centre, have good depth down the middle and overall. The bizarre game against Calgary saw 10 different players pick up a point with the exception of the top three scorers Karlsson, Bobby Ryan, and Kyle Turris. But it’s not like they’ve been slacking off.

Karlsson leads the team in scoring and plays 27 minutes a game. Ryan’s goal scoring is down, but playmaking is up and the former No. 2 overall pick is likely to have his best point total in four years. Turris has had the challenge of mostly dealing with the opposing team’s top line, but is on pace for a point total in line with last season’s.

According to NHLCapSpace.com, the Senators have the third lowest payroll and the third most salary cap space in the league. But next year, five key young players—including Zibanejad, Hoffman, and Stone—are restricted free agents along with Hammond.

For Ottawa, how things could look in the future is being seen in this hot streak. The team is in transition, but the key pieces to re-sign for a successful NHL squad are making themselves known.

Making the playoffs this season would be icing on the cake considering the depths they’ve had to dig themselves out from, but gaining playoff experience for the young squad would be a valuable bonus in the transition period.