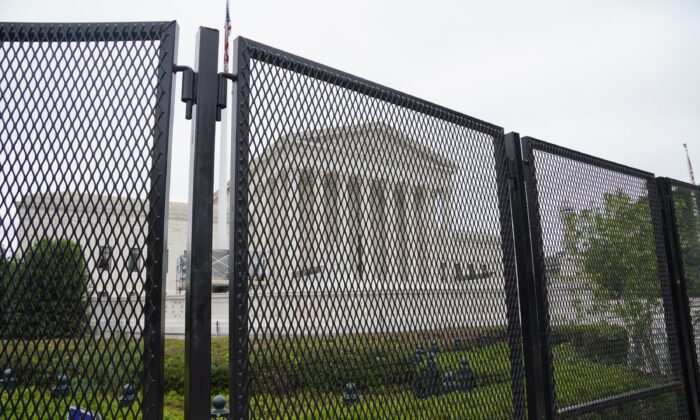 Fencing around the Supreme Court in Washington on May 5, 2022. (Jackson Elliott/The Epoch Times)
Judiciary

The Supreme Court decided on May 31 not to block a federal court’s order compelling three Republican members of the Texas House of Representatives to appear for depositions in a consolidated lawsuit over congressional and state-level redistricting.

The redistricting took place after the results of the 2020 census were published.

The emergency application filed on May 21 in Guillen v. League of United Latin American Citizens (LULAC), court file 21A756 (pdf), was an appeal from a ruling by the U.S. Court of Appeals for the 5th Circuit. The application was presented to Justice Samuel Alito, who referred it to the full Supreme Court. In accordance with its usual practice, the high court didn’t provide reasons for its decision not to grant the application.

The U.S. Department of Justice (DOJ) and other plaintiffs brought 10 separate lawsuits in an effort to prevent redistricting legislation from moving forward in the Lone Star State. Plaintiffs claim the electoral maps drawn by the state are gerrymandered and discriminate against minority voters, particularly Latino voters. The DOJ specifically said minority voters in West Texas, Houston, and the Dallas-Fort Worth areas were adversely affected by the redistricting.

The plaintiffs argue that the increase in the population of Texas came mostly from Latino, black, and Asian residents but the newly drawn maps dilute their voting strength by spreading those voters across several electoral districts. The DOJ stated in a brief that “between 2010 and 2020, Texas grew by nearly 4 million residents, and the minority population represents 95% of that growth.”

The plaintiffs also argue the new maps violate the 14th Amendment to the U.S. Constitution and that the federal Voting Rights Act (VRA) requires Texas to create more districts in which a majority of voters belong to racial minorities. A lower court consolidated the 10 cases into a single lawsuit.

The plaintiffs sought the testimony of Texas state Reps. Ryan Guillen, Brooks Landgraf, and John Lujan, all of whom are Republicans, in connection with the lawsuit. The lawmakers claim they don’t have to provide evidence in depositions because of the immunity and privileges they enjoy as lawmakers.

According to Texas, allowing the lawmakers to be deposed would “probe the very inner workings of the legislative process, examining the legislators’ thoughts, impressions, and motivations for their legislative acts.”

The DOJ stated in a brief (pdf) that it commonly seeks such testimony from lawmakers in redistricting challenges.

“As is routine in redistricting cases, the United States sought testimony from state legislators who represent some of the challenged districts—specifically, the three applicants here. Courts, including this Court, often rely on such testimony both in assessing the motive and justification for districting choices and in considering the ‘totality of circumstances relevant to minority voters’ electoral opportunities, as the VRA directs.”

The lawmakers will still be “free to assert the state legislative privilege in response to particular questions. Any answers given subject to an assertion of privilege are sealed and no party may use them unless and until the court grants a motion to compel,” the brief added.