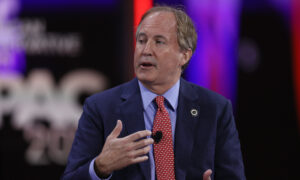 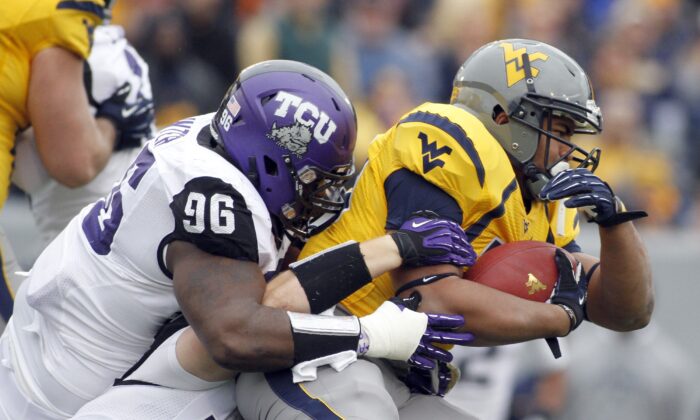 Shawne Alston (R) of the West Virginia Mountaineers, is tackled by Chucky Hunter of the TCU Horned Frogs during a game at Mountaineer Field in Morgantown, W.Va., on Nov. 3, 2012. (Justin K. Aller/Getty Images)
Judiciary

Before a skeptical Supreme Court on March 31, the National Collegiate Athletic Association (NCAA) defended its rules that preclude paying student-athletes.

The Biden administration sided with the student-athletes during telephonic oral arguments that ran 94 minutes instead of the allotted 60.

The case is actually two cases heard together: National Collegiate Athletic Association v. Alston, court file 20-512, and American Athletic Conference (AAC) v. Alston, court file 20-520. Former football player Shawne Alston, one of a group of football and basketball athletes challenging the NCAA, was a running back for the West Virginia University Mountaineers from 2009 to 2012.

For years, college football has been among the most popular spectator sports in the United States. Top schools earn tens of millions of dollars in annual revenue. The work of college athletes isn’t paid, although schools are allowed to give players non-monetary compensation such as athletic scholarships that cover the cost of books, housing, and tuition.

The athletes criticize in their brief what they say is “the profound inequity of a system that enables conference executives, athletic directors, coaches, schools, television networks, and a host of others to make billions of dollars on the backs of young, often underprivileged players.”

The hearing came after the 9th Circuit Court of Appeals upheld a ruling preventing the NCAA from limiting education-related compensation and benefits for Division I student-athletes in basketball and Football Bowl Subdivision programs. Its conferences can still independently set their own rules.

The attorney for the student-athletes, Jeffrey L. Kessler, urged the Supreme Court during oral arguments to uphold the ruling.

“The naked horizontal monopsony restraints that the competing NCAA schools have adopted in these labor markets would be per se unlawful in any other context.”

A monopsony is a market situation in which there is only one buyer.

The petitioners “had ample latitude to prove a procompetitive justification for all their restraints,” Kessler said. “Petitioners’ complaint is not a legal one. It’s that they lost on the facts. But that is not a basis for appealing to this court.”

“For five decades, the NCAA has argued that economic competition among its member schools would destroy consumer demand for college sports.”

But in three cases over that period, the “court struck down the restraints … and history has proven the courts were correct. Demand for college sports has continued to flourish,” Kessler said.

“As recently as 2015, the NCAA said you couldn’t provide even the most basic cost of attendance for the athletes. This case is … the latest iteration of the repeatedly debunked claims that competition will destroy consumer demand for college sports and that the NCAA should have a judicially created antitrust exemption because of an imaginary revered tradition that they argue for.”

NCAA lawyer Seth P. Waxman asked the justices to overturn the lower court ruling, describing it as “the one and only case in the history of the Sherman Act ever to strike down restraints that are what differentiates the product, and particularly in the unique circumstances here, it was manifest error to do so.”

“For more than a hundred years, the distinct character of college sports has been that it’s played by students who are amateurs … not paid for their play. Maintaining that distinct character … differentiates the NCAA’s product from professional sports.”

They argue “that colleges with powerhouse football and basketball programs are really exploiting the students that they recruit. They have programs that bring in billions of dollars,” Alito said.

“This money funds enormous salaries for coaches and others in huge athletic departments. But the athletes themselves have a pretty hard life. They face training requirements that leave little time or energy for study, constant pressure to put sports above study, pressure to drop out of hard majors and hard classes, really shockingly low graduation rates. Only a tiny percentage ever go on to make any money in professional sports.”

Waxman replied that “there is a healthy debate going on in legislatures around the country over whether college athletes should, as a matter of principle, be paid.”

The NCAA’s view is “if you allow them to be paid, they will be spending even more time on their athletics and … devoting even less attention to academics.”

“But, in fact, they are paid,” he said, adding they get lower admission standards, tuition, room and board, and other things.

Another way to look at it is “that schools that are naturally competitors as to athletes have all gotten together in an organization … that has undisputed market power, and they use that power to fix athletic salaries at extremely low levels, far lower than what the market would set if it were allowed to operate.”

Waxman waxed nostalgic saying his client’s “product … was created 116 years ago in response to abuses that were occurring as a result of instances of professionalism in athletics in order to restore integrity and the social value of college athletics.”

Kagan cut him off.

“Well, you can only ride on the history … for so long,” she said. “A great deal has changed since a hundred years ago in the way that student-athletes are treated.”

“But I think where the NCAA goes wrong is in suggesting that the analysis should be based on its own perspective of what it thinks supports amateurism, because amateurism is not its own free-floating ideal under the antitrust laws. It’s not something that the competition laws focus on to aspire to in and of its own right. It’s only relevant to the extent that it actually connects up to that procompetitive purpose of differentiating the product for consumers themselves.”