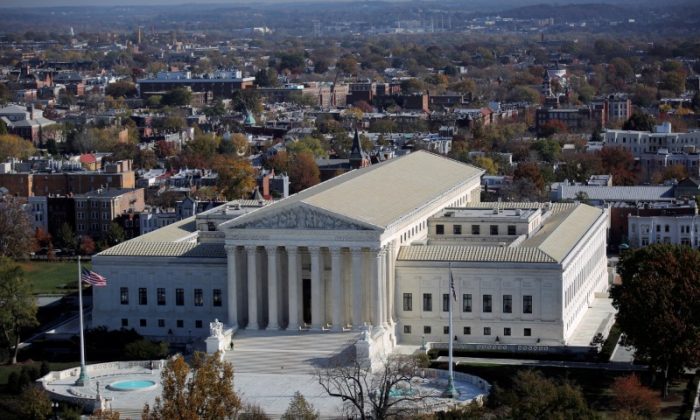 A general view of the U.S. Supreme Court building in Washington on Nov. 15, 2016. (REUTERS/Carlos Barria)
US

WASHINGTON—Police officers for the first time could be required to obtain warrants to get data on the past locations of criminal suspects based on cellphone use under a major case on privacy rights in the digital age taken up by the Supreme Court on Monday.

The justices agreed to hear an appeal by a man convicted in a series of armed robberies in Ohio and Michigan with the help of past cellphone location data who contends that without a warrant from a court such data amounts to an unreasonable search and seizure under the Constitution’s Fourth Amendment.

Cellphone location records are becoming increasingly important to police in criminal investigations, with authorities routinely requesting and receiving this information from wireless providers.

Police helped establish that the man at the center of the case, Timothy Carpenter, was near the scene of the robberies at Radio Shack and T-Mobile stores by securing past “cell site location information” from his cellphone carrier that tracked which local cellphone towers relayed his calls.

The case reaches the high court amid growing scrutiny of the surveillance practices of law enforcement and intelligence agencies amid concern among lawmakers across the political spectrum about civil liberties and police evading warrant requirements.

The legal fight has raised questions about how much companies protect the privacy rights of their customers. The big four wireless carriers, Verizon Communications Inc., AT&T Inc., T-Mobile US Inc. and Sprint Corp., receive tens of thousands of requests a year from law enforcement for what is known as “cell site location information,” or CSLI. The requests are routinely granted.

The Supreme Court has twice in recent years ruled on major cases concerning how criminal law applies to new technology, on each occasion ruling against law enforcement. In 2012, the court held that a warrant is required to place a GPS tracking device on a vehicle. Two years later, the court said police need a warrant to search a cellphone that is seized during an arrest.

The information that law enforcement agencies can obtain from wireless carriers shows which local cellphone towers users connect to at the time they make calls. Police can use historical data to determine if a suspect was in the vicinity of a crime scene or real-time data to track a suspect.

Carpenter’s bid to suppress the evidence failed and he was convicted of six robbery counts. On appeal, the Cincinnati, Ohio-based 6th Circuit Court of Appeals upheld his convictions, finding that no warrant was required for the cellphone information.

Civil liberties lawyers have said that police need “probable cause,” and therefore a warrant, in order to avoid constitutionally unreasonable searches.

“Because cellphone location records can reveal countless private details of our lives, police should only be able to access them by getting a warrant based on probable cause,” said Nathan Freed Wessler, a staff attorney with the American Civil Liberty Union’s Speech, Privacy and Technology Project who represents Carpenter.

“The time has come for the Supreme Court to make clear that the longstanding protections of the Fourth Amendment apply with undiminished force to these kinds of sensitive digital records,” Wessler added.

But, based on a provision of a 1986 federal law called the Stored Communications Act, the government said it does not need probable cause to obtain customer records. Instead, the government said, prosecutors must show only that there are “reasonable grounds” for the records and that they are “relevant and material” to an investigation.

The case will be heard and decided in the court’s next term, which starts in October and ends in June 2018.

The Trump administration said in court papers the government has a “compelling interest” for acquiring the records without a warrant because the information is particularly useful at the early stage of a criminal investigation.

“Society has a strong interest in both promptly apprehending criminals and exonerating innocent suspects as early as possible during an investigation,” the administration said in a brief.

David LaBahn, president of the Association of Prosecuting Attorneys, said warrants can be obtained quickly from judges but police may have problems getting the evidence needed to show probable cause.

“They may not be able to get over that legal hurdle, so the court couldn’t issue the warrant,” LaBahn said.

Civil liberties groups assert that the 1986 law did not anticipate the way mobile devices now contain a wealth of data on each user.

Steve Vladeck, a national security and constitutional law professor at the University of Texas, said the case will have “enormous implications” over how much data the government can obtain from phone companies and other technology firms about their customers without a warrant.

“Courts and commentators have tried to figure out exactly when individuals will have a continuing expectation of privacy even in data they’ve voluntarily shared with a third party,” Vladeck said. “This case squarely raises that question.”