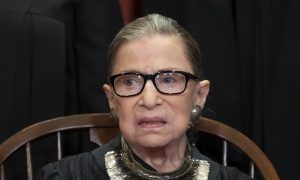 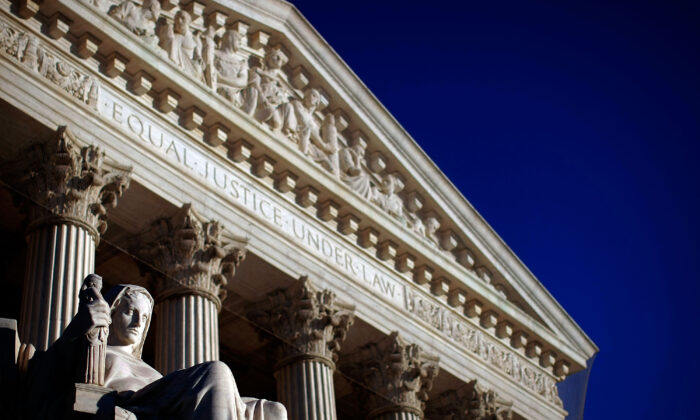 The U.S. Supreme Court is shown in Washington on Feb. 5, 2009. (Win McNamee/Getty Images)
US News

The U.S. Supreme Court resumes next Monday for another two weeks of oral arguments in some significant cases, including one on the Second Amendment.

The country’s high court has already begun hearing oral arguments of some cases on hot-button issues in the midst of what is widely viewed as a historic term. Earlier this month, the court heard the case for the Obama-era Deferred Action for Childhood Arrivals (DACA) program. The court also heard arguments for the case on the deportation of lawful permanent residents convicted of felonies, and one on whether the Civil Rights Act of 1964, a federal law that bans discrimination based on “sex,” applies in cases that involve the firing of a gay male employee.

The justices will hear oral arguments in a gun rights case on Dec. 2 that challenges a New York City ban on residents who wish to transport licensed handguns to any location outside city limits such as an out-of-city shooting range or a second home even if the handgun is unloaded and locked in a container separate from its ammunition. The case is known as New York State Rifle and Pistol Association v. City of New York.

The city argues that the transport ban promotes public safety by limiting the presence of handguns on city streets. The ban also forces residents to leave behind their handguns in vacant homes when traveling out of town, which is arguably posing greater safety risks.

The New York State Rifle and Pistol Association and several individuals brought the suit against the city in 2013 alleging that the ban violates the Second Amendment, the Commerce Clause, and the fundamental right to travel. The federal district and appellate courts ruled in favor of the city. The Supreme Court then agreed to hear the association’s appeal at the beginning of this year.

After the Supreme Court’s decision to take up the case, the New York Police Department (NYPD) announced in April that it was moving to loosen its rules on firearm transportation, by allowing licensed gun owners to transport firearms to a second home, business or any other place gun possession is permitted. The proposed NYPD came into effect in June.

Following the NYPD rule announcement, the city attempted to dismiss the appeal (pdf) by arguing that the case was moot as the city had given the petitioners what they had sought in the lawsuit. But the petitioners argued (pdf) that the proposed rules would not moot the case because they do not address whether the original transport ban was constitutional. They also argued that the introduction of the NYPD amendments is an effort to frustrate the court’s review of the case.

The case attracted support from many gun rights groups and academics who filed amicus curiae briefs in support of the petitioners, including the National Rifle Association of America (pdf).

Along with the NYC gun law case, the Supreme Court will also hear three consolidated cases related to the Patient Protection and Affordable Care Act, known as Obamacare, on Dec. 10. In those cases, three health insurance providers sued the federal government for failing to reimburse them for losses incurred while offering insurance under the Affordable Care Act. After the insurance providers started offering such coverage, Congress used appropriations riders that barred the Department of Health and Human Services of certain funds to pay the insurance companies in the fiscal years of 2015, 2016, and 2017.