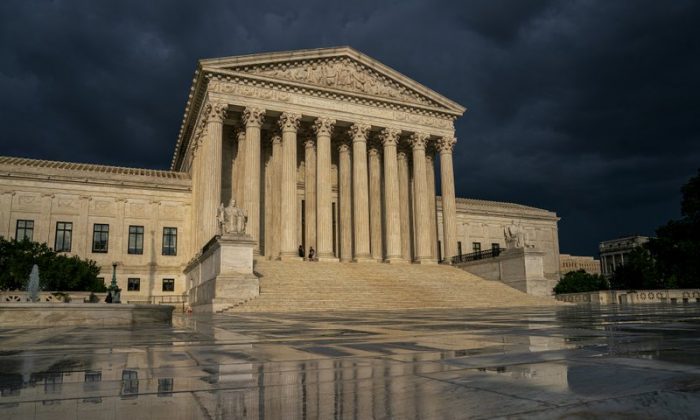 The Supreme Court is seen under stormy skies in Washington on June 20, 2019. (J. Scott Applewhite/AP)
US News

WASHINGTON—A divided Supreme Court was urged Oct. 8 to extend the protections of the Civil Rights Act of 1964, which bans discrimination based on “sex,” in two cases that involve a fired gay male employee.

“When an employer fires a male employee for dating men but does not fire female employees who date men, he violates Title VII,” their attorney, Pamela S. Karlan of Stanford Law School, told the justices.

“The employer has discriminated against the man because it treats that man worse than women who want to do the same thing. And that discrimination is because of sex.”

Title VII of that federal statute that emerged during the Civil Rights era prohibits employment discrimination based on race, color, religion, sex, and national origin, but it doesn’t actually mention sexual orientation or sexual preference.

At issue in the case is the meaning of the word “sex,” which has traditionally been taken to refer to a person’s biological sex at birth, as opposed to sexual orientation.

The Supreme Court ruled in Obergefell v. Hodges (2015) that the fundamental right to marry is guaranteed to same-sex couples under the Due Process Clause and the Equal Protection Clause of the 14th Amendment to the Constitution. Before that, in Lawrence v. Texas (2003), the court made same-sex sexual activity lawful throughout the United States.

But the extent to which gays and lesbians are protected in the realm of employment law is less clear-cut.

And the court’s decision to hear the cases as the 2020 presidential election campaign heats up, is bound to inject hot-button culture-war issues into the upcoming presidential election. Liberals may be outraged if the court fails to do enough to protect LGBT rights; conservatives may be outraged if the court goes too far to protect those individuals or is accused of inventing new rights. A decision in the case seems likely by June 2020.

Sen. Elizabeth Warren (D-Mass.), who is seeking the Democrats’ presidential nod for 2020, took the Trump administration to task hours before the hearing for urging the high court to narrowly interpret the word “sex” in the civil rights law.

“The Trump administration is arguing that the Supreme Court should undo the progress we’ve made and let employers fire LGBTQ+ people because of their gender identity or sexual orientation[,]” Warren wrote on Twitter. “We need a president that will fight discrimination and protect LGBTQ+ rights.”

In a brief filed with the court, the Trump administration said Title VII doesn’t cover cases like these, a departure from the view of the Obama administration.

Some justices pushed back on the notion that the word sex covers anything beyond biological sex.

If the court were to agree with Karlan, some will say “that whether Title VII should prohibit discrimination on the basis of sexual orientation is a big policy issue, and it is a different policy issue from the one that Congress thought it was addressing in 1964,” Justice Samuel Alito said.

Justice Sonia Sotomayor said, “At what point does a court continue to allow invidious discrimination? We can’t deny that homosexuals are being fired just for who they are.”

Gerald Bostock, who worked as a child welfare services coordinator, claimed the county fired him on a false pretext after discovering he was gay. In the second case, Donald Zarda, a skydiving instructor in New York, claimed he was fired from his job for being gay. Zarda died during the course of the litigation, but his estate continued the appeal.