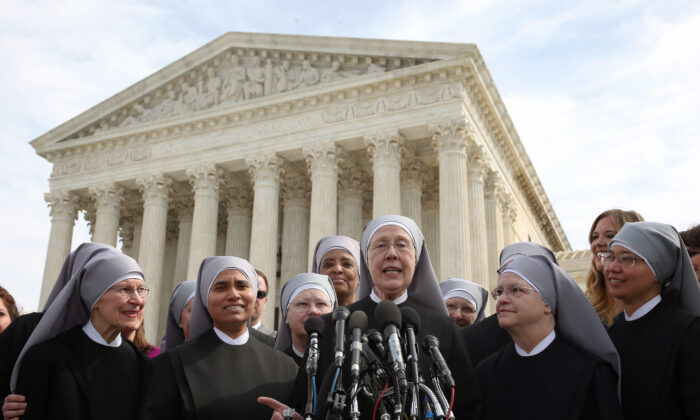 Mother Loraine Marie Maguire, (C), of the Little Sisters of the Poor, speaks to the media after arguments at the U.S. Supreme Court in Washington on March 23, 2016. (Mark Wilson/Getty Images)
US News

WASHINGTON—The Supreme Court has agreed to hear an appeal from Little Sisters of the Poor, a Roman Catholic order of nuns, regarding its objection on religious grounds to having to provide health insurance that covers birth control, sterilization, and abortifacients for its employees under the Obamacare law.

The case, cited as Little Sisters of the Poor v. Pennsylvania, is the latest in a series of lawsuits. The Supreme Court granted certiorari Jan. 17, agreeing to review a ruling by the U.S. Court of Appeals for the 3rd Circuit.

The Little Sisters of the Poor, a religious order and charity that operates facilities nationwide, describes itself on its website as “an international congregation of Roman Catholic women … founded in 1839 by Saint Jeanne Jugan … [who] serve the elderly poor in over 30 countries around the world. … [They offer] the neediest elderly of every race and religion a home.”

“It is disappointing to think that as we enter a new decade, we must still defend our ministry in court,” Mother Loraine Marie Maguire of the Little Sisters of the Poor said in a statement.

“We are grateful the Supreme Court has decided to weigh in, and hopeful that the Justices will reinforce their previous decision and allow us to focus on our lifelong work of serving the elderly poor once and for all.”

The Obama-era contraception mandate has been a source of controversy since it surfaced in 2011, spurring more than 100 lawsuits from private individuals, religious groups, state governments, and businesses that objected to it on religious grounds. In October 2017, the Trump administration issued a regulation that exempted religious groups from complying with the Obamacare mandate.

The government said it had been wrong to try to compel the Little Sisters and others to provide services such as the morning-after pill in their health plans because doing so violated their religious beliefs.

President Donald Trump signed Executive Order 13798 on May 4, 2017, in which he took steps to protect Americans’ fundamental rights of conscience and religious liberty.

EO 13798 states it “shall be the policy of the executive branch to vigorously enforce Federal law’s robust protections for religious freedom” because our “Founders envisioned a Nation in which religious voices and views were integral to a vibrant public square, and in which religious people and institutions were free to practice their faith without fear of discrimination or retaliation by the Federal Government.”

The order directs that all “executive departments and agencies … to the greatest extent practicable and to the extent permitted by law, respect, and protect the freedom of persons and organizations to engage in religious and political speech.”

Pennsylvania, which doesn’t have a state-level contraceptive mandate, sued the Trump administration to take away the religious exemption after acknowledging it already has many of its own government programs that provide contraceptives to women who seek them. Pennsylvania’s position is that the Little Sisters have to comply with the federal mandate or pay tens of millions of dollars in fines.

“Pennsylvania needs to give it a rest,” said Mark Rienzi, president of the Becket Fund for Religious Liberty, a public-interest law firm that represents the Little Sisters.

“Why is Pennsylvania still trying to fight tired and unnecessary culture wars that were settled years ago? There are plenty of ways to provide people with contraceptives without forcing Catholic nuns to participate. It’s too bad that the Supreme Court is being forced by Pennsylvania to deal with this issue again, but at least the Court can now bring this litigation to a permanent end.”

In a separate case, cited as California v. Little Sisters of the Poor, a three-judge panel of the U.S. Court of Appeals for the 9th Circuit ruled on Oct. 22 that a preliminary injunction issued by a federal judge against the Trump-era exemption provided to religious groups could continue.

The injunction bars enforcement of final rules by the U.S. Department of Health and Human Services in California and the other 12 states involved in the lawsuit (plus the District of Columbia) that exempt employers with religious and moral objections from the Affordable Care Act’s requirement that group health plans cover contraceptive care.