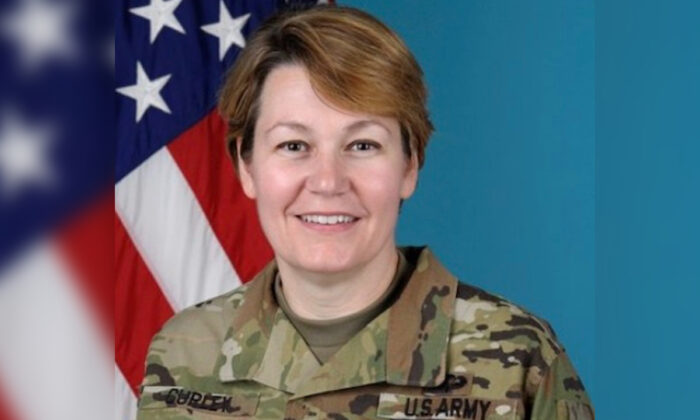 Maryland Gov. Larry Hogan and Montgomery County, Maryland, Executive Marc Elrich sharply rebuked Supreme Court Marshal Gail Curley after she wrote letters to both demanding they do more to protect justices whose lives have been threatened.

Both officials say they are doing their best in difficult circumstances and that protecting the justices is primarily the responsibility of the Biden administration, which they say has fallen down on the job. They expressed displeasure with Curley, claiming she took her case to the media before contacting them.

As marshal, Curley is responsible for court security, the court’s police force, and the personal safety of the justices. Despite her title, Curley’s office isn’t part of the U.S. Marshals Service.

Curley wrote to both officials on July 1 after raucous protests at the homes of justices in the state began in the wake of the unprecedented May 2 leak of a draft opinion foreshadowing the court’s June 24 decision to overturn the 1973 Roe v. Wade abortion precedent, and escalated after the ruling itself was issued.

The letters came after authorities foiled a June 8 alleged attempt to assassinate Justice Brett Kavanaugh at his Maryland home. Nicholas John Roske, who reportedly said he wanted to kill Kavanaugh to prevent him from voting to overturn abortion rights and gun control laws, entered a not guilty plea after a federal grand jury indicted him.

Curley, who has been quietly investigating the document leak for weeks, wrote to Hogan, saying that various laws “prohibit picketing outside of the homes of Supreme Court Justices who live in Maryland,” and urged him to direct the Maryland State Police to enforce those laws. She cited 3-904(c) of the Maryland Criminal Code, which provides a person “may not intentionally assemble with another in a manner that disrupts a person’s right to tranquility in the person’s home.”

In a statement posted on Twitter, the governor’s press secretary, Michael Ricci, pointedly accused Curley of getting the facts wrong.

“Had the marshal taken time to explore the matter, she would have learned that the constitutionality of the statute cited in her letter has been questioned by the Maryland Attorney General’s Office,” Ricci wrote, without elaborating on the point.

Maryland Attorney General Brian Frosh didn’t respond by press time to a request by The Epoch Times for his opinion on the constitutionality of the state law.

“Amid all this, our state and local law enforcement agencies have been on the front lines every day protecting these communities,” Ricci continued. “In light of the continued refusal by multiple federal entities to act, the governor has directed Maryland State Police to further review enforcement options that respect the First Amendment and the Constitution.”

Elrich told The Epoch Times he was dismayed by Curley’s “irresponsible and disappointing behavior” in trying to secure better security for the justices.

By email, Elrich said he didn’t receive Curley’s correspondence and only learned of it after court officials “distributed this letter to the media.”

“It is very troubling that the Court would take this approach,” Elrich said, adding that U.S. marshals are on duty outside the justices’ residences.

“If the Marshal is concerned about security, then she and her staff should communicate directly with our police chief, myself, and my staff rather than having a letter released to the press” because “it is more appropriate to have direct conversations and discussions, not through the media.”

“This public discussion regarding safety and security of Supreme Court members is counterproductive, and using the media only further draws attention to the security of the Justices’ homes and neighborhoods. Moreover, I have spoken with [Montgomery County] Police Chief Marcus Jones, and he is not aware of any requests for additional security assistance. Quite frankly, discussing security concerns publicly is irresponsible and disappointing behavior.”

The county is “following the law that provides security and respects the First Amendment rights of protestors,” Elrich said.

“It is noteworthy that the primary responsibility for the safety of the Supreme Court justices and their families lies with the federal government. Under federal laws, the Marshals can arrest an individual who is in violation of a federal law.”

The Supreme Court’s Public Information Office and the U.S. Department of Justice didn’t respond by press time to a request for comment.